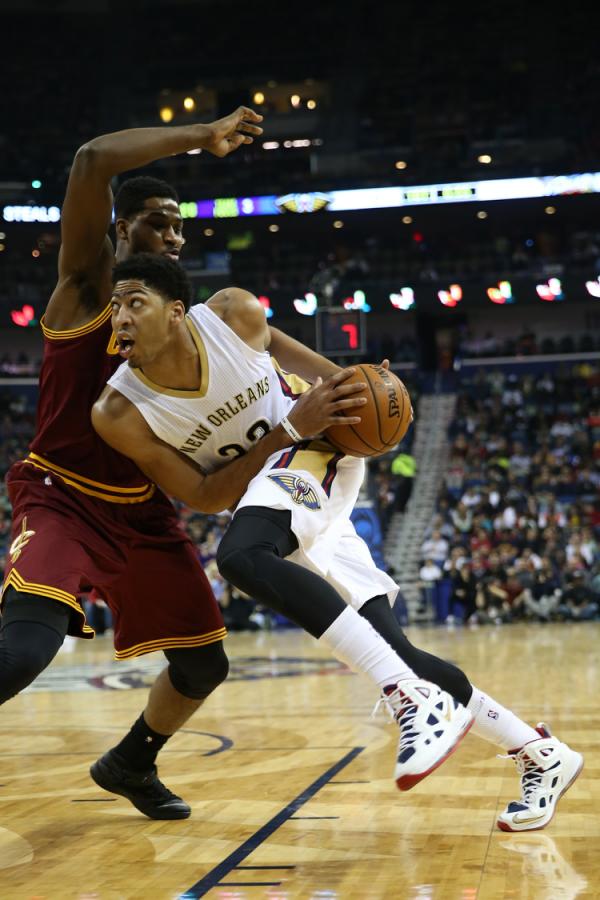 The Cavaliers traveled to New Orleans to face the Pelicans Friday night at the Smoothie King Center. Cleveland would start out hot, let off the gas pedal in the second and third quarters, and despite an amazing fourth quarter from LeBron James, come up short, falling to the Pelicans in overtime 114-108.

Smith was drafted by the New Orleans Hornets in 2004, selected 18th overall right out of high school, and he reminded the fans in “the Big Easy” what it looks like when he gets hot, as Smith hit five three-pointers in the first quarter to give the Cavs a 27-21 lead after one.

The Pelicans cut it down to two with about five minutes left in the second quarter before James hit a deep three from well beyond the arc. The next Pelicans’ possession would send a scare through the New Orleans’ faithful, as star power forward Anthony Davis appeared to roll his ankle, stepping on Timofey Mozgov, and went back to the locker room to be checked out.

Fortunately, Davis was back on the floor after just two minutes had expired off the game clock.

New Orleans would tie the game at 47 with 1:27 remaining in the first half, thanks to a Tyreke Evans layup, as part of a 9-2 run.

Kevin Love would answer back to regain the lead for the Cavs, but Eric Gordon drained a three to give the Pelicans a 50-49 lead with less than a minute to play in the half.

Two possessions later, with the Pelicans up 52-51, Love made a beautiful post move to give the Cavs the lead at halftime 53-52.

38 of the Cavs’ 53 points in the first half came courtesy of the trio of James, Love, and Smith.

After halftime the Cavs would jump out to a three-point lead before Davis tied it up with a three-pointer from the corner, a shot he has been working on this past year.

Smith found the bucket once again after a scoreless second quarter, as he hit his sixth shot from beyond the arc to make it a five-point game with just over ten minutes to play in the third.

New Orleans would fight back as the quarter progressed, going on a 10-1 run and taking a 66-63 lead, thanks to another three from Gordon.

Not long after, Davis would hit a contested jumper with a hand in his face to give New Orleans a four-point lead, followed up by an Evans layup in transition to make it 70-64, their largest lead of the night up to that point.

The Pelicans’ run would continue, as Davis made it a seven-point game with a close range shot and then Ryan Anderson knocked down a wide open three to make it 76-66 with three and a half minutes left in the third quarter.

The Cavs responded to a 20-6 Pelicans’ run by closing out the third quarter trailing 84-77.

The fourth quarter did not start well for Cleveland, as Davis hit his second three-pointer of the night midway through the quarter, to make it 92-81 and then Dante Cunningham made a 13-point game in favor of the Pelicans.

LeBron led a comeback for the Cavs scoring eight consecutive points for his team, and then found a wide open Matthew Dellavedova for a three-pointer to cut the deficit to four with four minutes to play.

The King willed his team back to within one point after driving to the basket, sinking the layup while drawing contact, and converting on the free throw to make it 98-97 with 2:40 to go.

The Cavs would get another big defensive stop and right on cue, LeBron drove to the basket for a beautiful layup to make it a three-point game with 1:17 left.

Anderson got it back down to one, and then Davis came through with a clutch steal and a fast break dunk to give the Pelicans a 102-101 lead with 45 seconds to play.

LeBron went right at Davis on the next possession and got the friendly roll, finishing with the left hand to regain the lead with 30 seconds on the clock.

Evans missed a layup on the other end and the Pelicans were forced to foul LeBron who came down with the rebound with 15.5 seconds left.

Jrue Holiday calmly tied the game with 8 seconds to play with a deep three.

James missed a jumper at the buzzer and the game would head to overtime tied at 105, as his 23 points in the fourth quarter were not quite enough to win it in regulation.

Davis got the Pelicans off to a good start with a runner to open up the overtime period and take a two-point lead.

A few possessions later, Holiday made a nice drive to the basket and layed it in to put the Pelicans up three.

Davis would extend the lead to five with a spin move and fade away jumper over Smith, as the Cavs did not hit a field goal in the first two minutes of overtime.

Love finally made an appearance with 2:40 to play in OT, with a nice post move to cut it down to three.

Love had only one point since halftime prior to that basket.

Davis responded with another great spin move and pull up jumper.

Neither team could find a bucket for a few possessions in a row.

Smith would miss on an open three with 30 seconds remaining. Evans would miss on the other end, giving the Cavs the ball with 17.2 seconds down by five.

Smith missed another three. The Pelicans would close it out and win 114-108.

LeBron finished the night with 37 points on 13 of 29 shooting, 23 of which came in the fourth quarter, but was held scoreless in overtime.

Davis led the way for the Pelicans with 31 points and 12 rebounds.

Love and Smith, who had scored a combined 27 points in the first half, were held to just six combined points after halftime.

Cleveland shot just 1 for 7 from the field in overtime.

The Cavs have now lost three of their last five games, and the loss makes them 13-6 on the season. They travel to Miami to take on the Heat Saturday night.