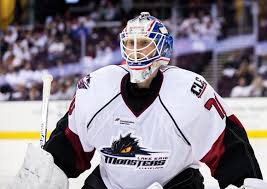 The Cleveland Monsters have some news regarding the team that broke Monday.

The first bit of news is that Keith Aulie has been released from his professional tryout contract with the Columbus Blue Jackets. Aulie had been playing for the Cleveland Monsters for the last week, as the defenseman played three games for the team. In those games, Aulie had a -1 +/- when on the ice.

The other news is that goaltender Joonas Korpisalo has been assigned to the Monsters. Korpisalo is returning from the Injured Reserved after missing the start of the season due to a groin injury he suffered in preseason. Korpisalo helped the Monsters win the Calder Cup last year, so fitting in should not be a problem.