Is North Dakota State QB Carson Wentz the Answer for the Browns in the Draft? 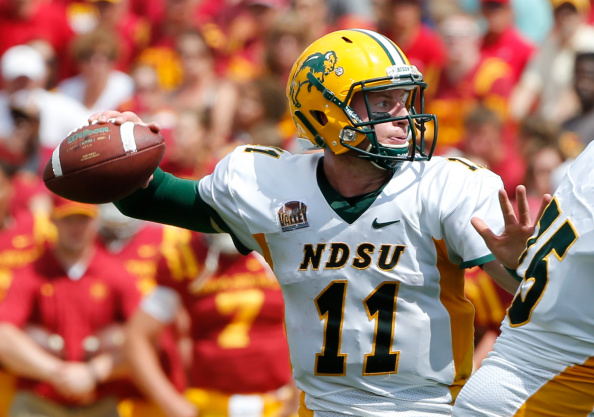 With all the question marks about the Browns and the quarterback position, there’s no doubt the team will be very much looking at the position in May’s NFL Draft, where the Browns hold the number two pick.

With the Tennessee Titans having taken Marcus Maroita in the first round last season, the Titans won’t be taking a quarterback, which means it’s all on the Browns when it comes to if they want a quarterback with the second pick – that is unless someone jumps them at the number one spot.

For now, let’s pretend that the Browns have the option of the quarterback they want on the board – which player would they choose? The two QB’s that everyone is talking about is CAL’s Jared Goff and North Dakota State’s Carson Wentz.

WalterFootball.com currently has Wentz as the player the Browns will take with the second pick. Here’s their comments on the Browns taking the QB:

Toward the end of the season, I thought the Browns would draft Joey Bosa. Things change quickly, however, and as we all learned, Johnny Manziel is having major personal issues, pretending to be someone named Billy in Vegas while drinking his life away. The Browns can’t go forward with a self-destructive alcoholic. New regimes mean new quarterbacks, anyhow, so Cleveland’s front office will want to obtain its own guy.

If you check out the Senior Bowl Coverage, you’ll see that Charlie Campbell’s Monday rumors page has a report in which the Browns really like Carson Wentz. This is a lot closer than people think between Wentz and Jared Goff, and if the former has a strong showing in Mobile, he could emerge as the favorite to be chosen No. 2 overall.

Cleveland.com’s May Kay Cabot spoke to an NFL exec at the Senior Bowl, who told her that if the Browns do indeed take Wentz, they will finally have their starting quarterback, and will have him (if he stays healthy) for 15 years.

“If the Browns take Carson Wentz at No. 2 they’d be set for 15 years,” the executive said.

“He’s the best quarterback in the draft. If I were picking at No. 2, I’d take him. It will solve all of their problems and they’d get that team turned around.”

Wentz met with new Browns head coach Hue Jackson, and said that he feels that the coach is going to thrive with his new team.

“It went well and he seemed like a really good guy and obviously I’m assuming he’s going to be a really good coach up there in Cleveland,” said Wentz.

We shall see if the Browns are going to invest the future in Wentz, and if once they do he’s right away put in the starter role much like Jameis Winston was this last season with Tampa Bay and Mariota was in Tennessee.

Here’s some highlights of Wentz balling it at Nort Dakota State: