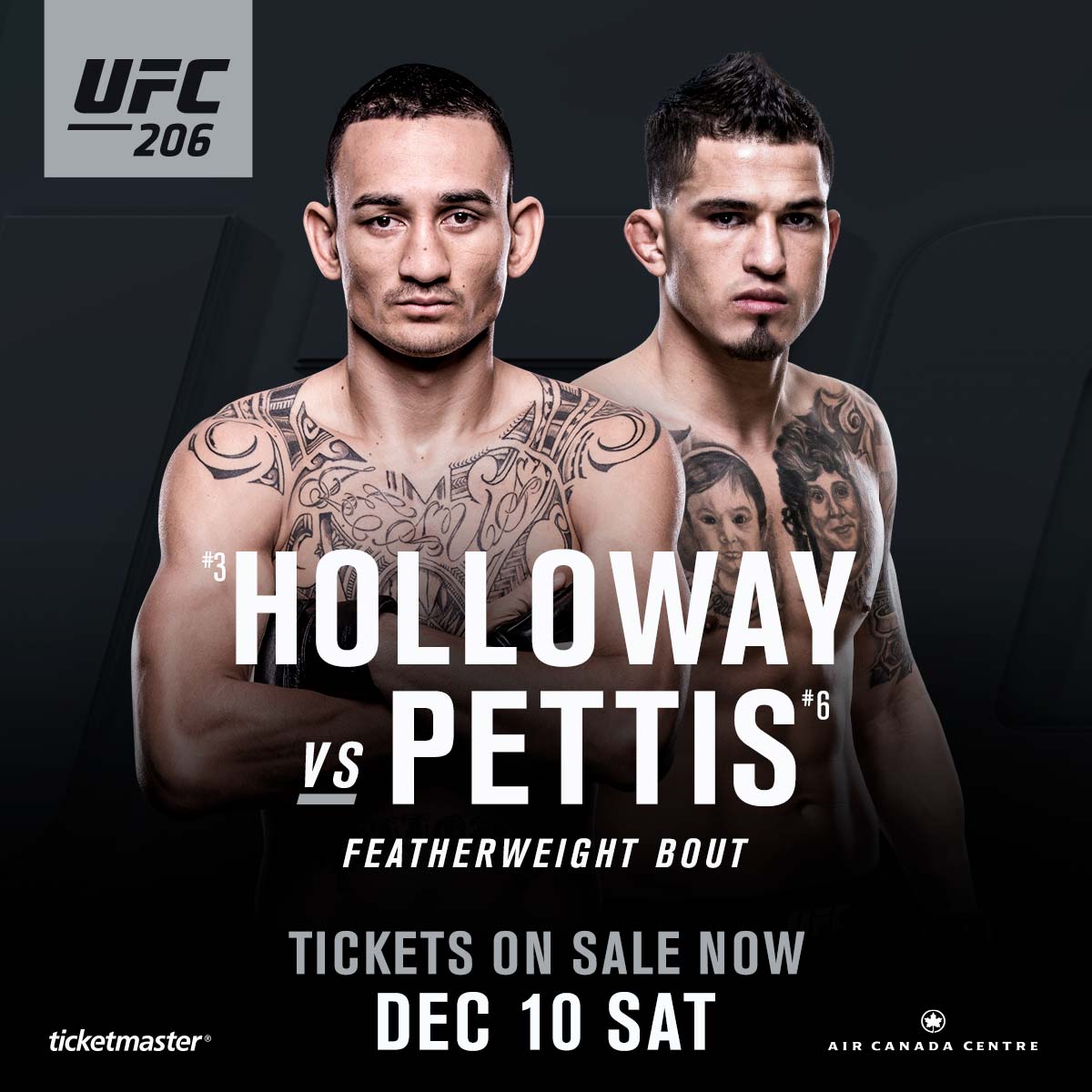 TORONTO, Canada – Despite several switches late to the main card and very low expectations for tonight, UFC 206 ended up as one of the best cards of the year with an incredible main card.  The main event saw Max Holloway win the “Interim” Featherweight Title, which pretty much means he will get the next chance at the actual champ, Jose Aldo.

It was clear from the opening moments of the fight, that something was wrong with Anthony Pettis.  He would later admit that he did in fact break his hand on his first punch with Max Holloway.

The first round was close but NEO scored it 10-9 for Holloway based on the last few seconds of the round that saw Holloway score with a left hook, and Pettis shoot for a last second takedown just before the buzzer but couldn’t complete it.

The second round was more of the same with Holloway scoring points at will with several shots.  Pettis tried to bring him against the cage and go for takedowns, but couldn’t pull it off.  Holloway would put Pettis away in the third with a barrage of kicks and punches until referee Yves Lavigne finally saw enough and peeled Holloway off of Pettis and stopping the fight.

One thing is for sure, Holloway deserves a shot at Aldo for the real bet and will give him all he can handle.  Pettis didn’t look right all night and admitted to as much afterwards explaining that he has to bump back up to 155 as the cut to 145 was too much for him.

Elsewhere on the card saw fireworks as well as Donald Cowboy Cerrone moved to 4-0 as a welterweight with a wild left high kick knockout of Matt Brown.  Cerrone took advantage of the Brown mistake of putting his head in range leaning forward, he served the knockout up on a platter for the Cowboy, and Cerrone took full advantage of it.

Both men left it all in the cage tonight as it was a wild non stop action fight that saw both men come within inches of winning until Cerrone finally did.  Brown had Cerrone in big trouble however a few times before the flashy knockout.

Kevin Gastelumn made an impressive debut at 185lbs with a third round TKO of Tim Kennedy.  Gastelumn may have finally found his proper weight as he looked the best he ever has in his career tonight.

The best fight of the night was a 3 round slugfest that saw Cub Swanson pull of a thrilling decision victory against Doo Ho Choi.  People are already calling that the fight of the year.

The UFC’s next event is a week from tonight and will be headlined by a triple main event.  It is UFC Fight Night on Fox as Paige VanZant takes on Michelle Waterson, Sage Northcutt battles Mickey Gall and Uriah Faber closes his career out by taking on Brad Pickett.