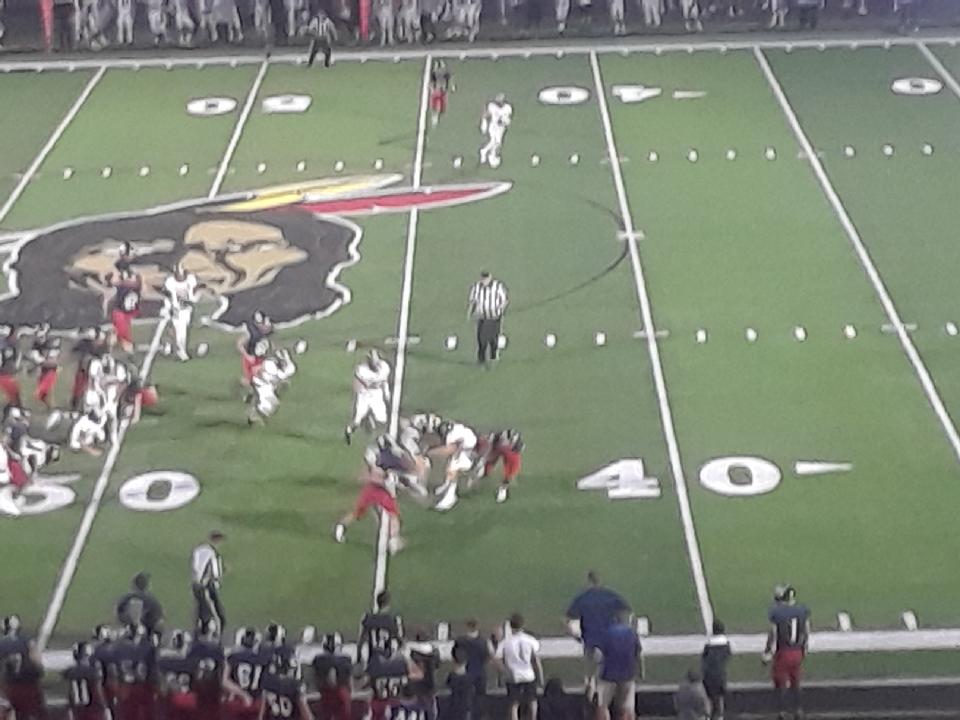 WARREN, OHIO – On a warm Saturday night at Mollenkopf Stadium the Warren JFK Eagles (2-1) on their senior night invited the Garrettsville Garfield G-men in for a non conference tilt. After JFK punted after their first possession. The G-men got the ball for the first time on their own 18-yard line.

The drive stalled on their own 27 yard line. On 4th and 1 the G-men tried to draw the Eagles offsides and they jumped offsides themselves. Garfield was forced to punt and the ball went off the side of the punters foot.

The Eagles of JFK started the drive on their own 32 yard line and after 5 plays all runs Junior Cameron Hollobaugh took the ball on a sweep the left side for a 12 yard Touchdown run. Senior kicker, Armand Nannicola came on to put through the extra point to make the score 7-0 JFK.

After JFK punted their first possession of 2nd quarter on 3rd–and-5 from their own 45 yard line sophomore Anthony Demma took an inside counter off right tackle for 41 yards down to the Kennedy 14 yard line. Two plays later junior Austin Lysiak took the ball up the middle for a nine-yard touchdown run.

Freshman Colin Lysiak came in for the extra point to tie the game at seven.On the next possession for Kennedy junior Jesse Likens took the ball from his own 47 yard line to the 14-yard of the G-men.

A mishandled handoff that Kennedy recovered and a sack backed JFK to the 24-yard line. On 3rd and 20 Sophomore Quarterback Michael Mauro looked to the left side and threw it up for junior Gabe Green who cut in front of the defensive back to haul in the pass for a 24-yard touchdown strike.

Nannicola came on to kick the extra point to make the game 14-7. Garfield stalled around midfield they punted and the ball touched a JFK player and was recovered on the JFK 18 yard line.

Three plays later sophomore Ryan Stoller went around left end for a touchdown that was called back on a holding call. The next play sophomore Brody Swigonski threw a 12-yard touchdown pass to Demma who broke several tackles to get into the endzone for a touchdown. The kick was good to make it 14-14 at Halftime.

The G-men took the 2nd half kickoff down from their own 27 to the JFK 34-yard line in 7 plays then Demma took the ball down the left side on a sweep for 34 yards to make the score 21-14.

JFK went three and out in their first possession of 2nd half and got a good roll on the punt to the G-men 6-yard line. Garretsville grinded their way to the 35-yard line on five runs then surprised the JFK defense as Swigonski threw to a wide open Stoller for a 65 yard touchdown pass to make the score 28-0 with 2:47 left in the 3rd quarter.Kennedy took over from their 38 and two plays in got a big pass by Mauro to sophomore Jaylin Turner to the G-Men 28-yard line to end the 3rd quarter.

On a 4th and 1 from the 19-yard line to start the 4th quarter Kennedy QB Mauro drew the G-Men dline off sides to get a 5 yard penalty and a 1st down. Three plays later Cameron Hollobaugh plunges in from 4 yards out to make the score 28-21 after Nannicola’s Extra point.

On the first play for the G-Men after the Kennedy score Demma goes around the right end for a 60 yard td run to make score 35-21. On 4th and 7 from the Kennedy 47 Hollobaugh playing quarterback dropped back seen nobody open and ran the ball for a 10 yard gain off the left side breaking a couple tackles to get the ball.

The next play Mauro threw the ball to Savone Williamson for a circus catch while being torn to the turf by a defender down to the Kennedy 7.

Two plays later Hollobaugh took it up the middle for a one-yard touchdown run. On the following kickoff Kennedy tried to squib kick it and Junior Santino Chiaro picked up and went untouched for a 53-yard touchdown run to make it 43-28.

Kennedy on their final drive drove from their 30 to the 35 of the G-men and Mauro threw a pass that senior Chris Perme stepped in front of the pass to end the game.

Garretsville Garfield (4-0) plays at home against Windham next week. And Warren JFK (2-2) travels to Oregon Ohio to face Cardinal Stritch next week.