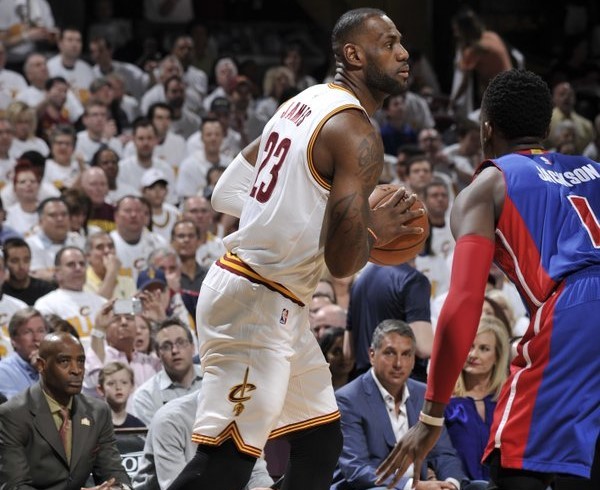 The Playoffs tipped off Sunday afternoon for the #1 Cleveland Cavaliers and #8 Detroit Pistons at Quicken Loans Arena.

The Pistons came out ready from the jump.

Shooting Guard Kentavious Caldwell-Pope made some beautiful shots, including this one in the first quarter.

The Cavs would respond and end the quarter on a good note. LeBron James would hit a layup at the buzzer to give Cleveland a 27-25 lead heading into the second.

Kyrie Irving carried the Cavs early in the second quarter, making some cold-blooded shots, like this:

The Pistons were not intimidated, as Marcus Morris had a great first half, scoring 19 points. Morris made this three to give the Pistons a 50-47 lead.

The Cavs had great production offensively from LeBron (12 points), Irving (14 points), and Kevin Love (18 points) who combined for 44 of Cleveland’s 53 points in the half, but Detroit would lead 58-53 at the half.

Irving kept his great night going to start the second half, scoring eight points in 64 seconds.

J.R. Smith made a ridiculous three-pointer midway through the third quarter to give the Cavs a five-point lead, which was the biggest of the night up to that point.

Detroit would answer right back, tying the game at 74 with three and a half minutes left in the third quarter.

The Pistons would lead 78-76 heading into the fourth quarter.

Detroit would start out the fourth quarter on a 5-0 run, to lead by seven with 11 minutes to play.

Cavaliers Head Coach Tyronn Lue called a timeout and the Cavs came out energized, scoring seven straight points to tie the game at 83 with 9:23 to play.

It went back and forth for the next two minutes before Richard Jefferson knocked down a deep two to make it a three-point game.

Reggie Jackson responded promptly with a three to tie the game at 88 with 6:28 to play.

Love hit two huge threes in a two-minute time frame to help the Cavs lead 94-90. None bigger than this one with 4:48 remaining.

The Pistons would hang around for the next few minutes, getting it down to a three-point game with 2:50 to play, before Irving made a clutch layup to make it 100-95 with 2:35 remaining.

Irving and Smith would ice the game at the free throw line, knocking down four of six free throws to help the Cavs close out the 106-101 victory.

Love ended up with 28 points and 13 rebounds.

Jackson scored 17 points, ten of which came in the fourth quarter.

Caldwell-Pope put up 21 points, 13 of which came in the first half.

Morris, who scored 19 in the first half, was held to only one free throw in the second half. He finished the night with 20 points.

Andre Drummond, who was held silent for most of the night offensively, put up 13 points and 11 rebounds.