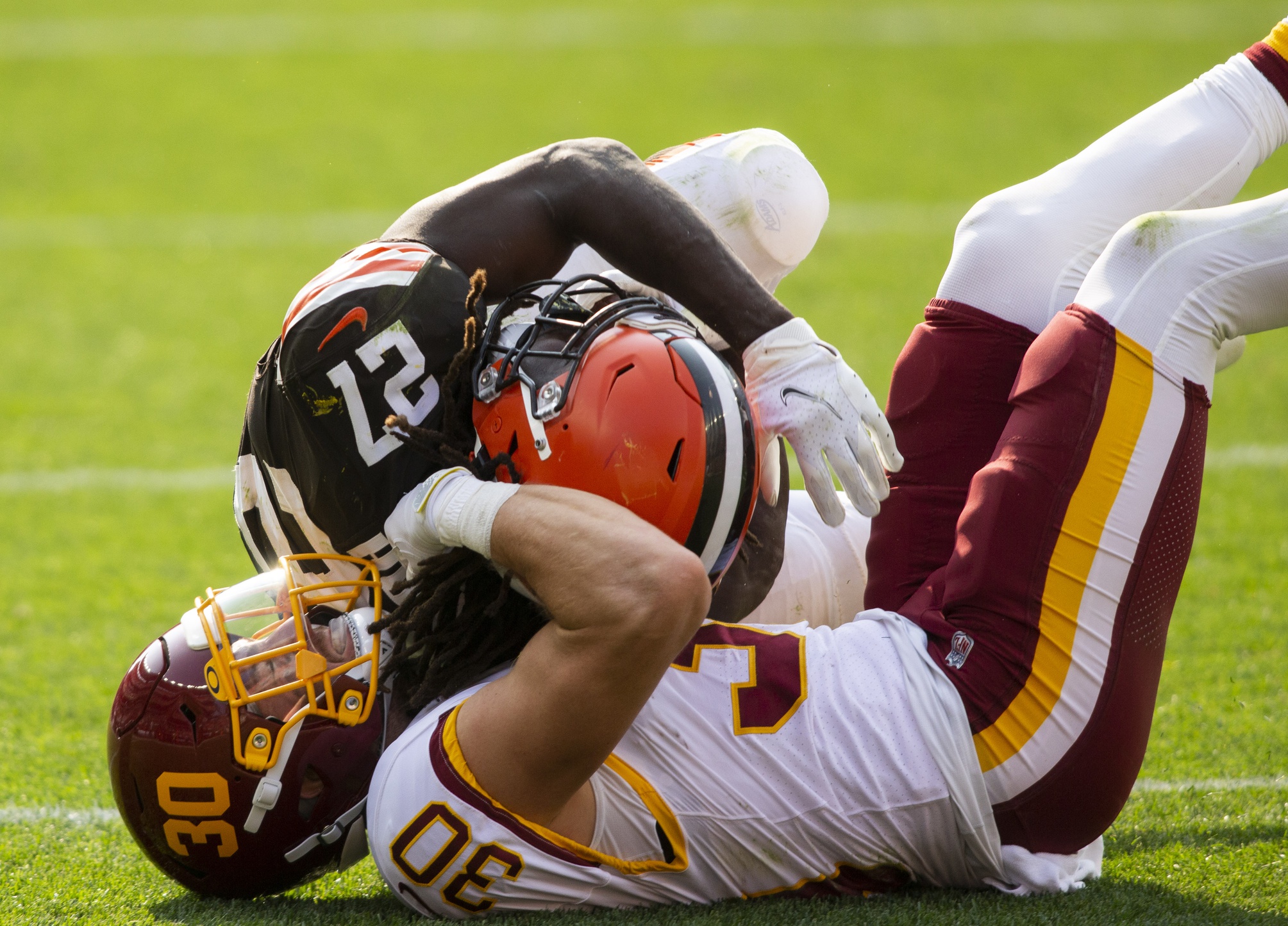 The Cleveland Browns came into Sunday’s game against the Washington Football Team looking to be above .500 for the first time since 2014. Nick Chubb scored twice for the second consecutive game, while the defense forced five turnovers, helping lead the Browns to a 34-20 win.

The Browns opened the game on offense, putting together a couple first downs to drive to the Washington 44 yard line. However, a false start penalty from Jedrick Wills on second down halted the drive, forcing the Browns to punt two plays later.

After pinning the Football Team deep in their own territory, The Browns defense allowed 47 yards on four plays to give the Football team a first down in Cleveland territory. Three incompletions and a five yard loss on a run from J.D. McKissic stopped the Football Team momentum, as the Browns forced a punt at midfield.

On the next drive, Mayfield found Odell Beckham Jr. on third and nine for an eight yard connection to keep the drive alive. To no avail as three plays later the Browns were forced to punt thanks to a couple incompletion bookending a Jonathan Allen sack.

After the touchback on the punt, Dwayne Haskins and the Football Team offense drove down the field to score in eight plays, ending with a 17 yard touchdown connection from Haskins to Dontrell Inman, giving the Football Team a 7-0 lead late in the first quarter.

Facing their first deficit of the game, the Browns came back to the field to mount a 13 play drive into the second quarter. However, the drive stalled at the Washington 24, as the Browns settled for a Cody Parkey field goal to cut into the deficit.

Haskins found Terry McLaurin twice on the ensuing drive for connections of 14 and 33 respectively to drive deep into Browns territory. However, disaster struck for Haskins, a 10 yard penalty on first down halted all momentum, before a five yard loss on a screen forced a second and 25. On the down, Haskins would look for it all in one shot, being intercepted on the play by Karl Joseph.

Being gifted some great field position from the defense, the Browns offense cashed in quickly as it only took three plays for a touchdown. Nick Chubb weaved around defenders for the 16 yard score on the third play of the drive, giving the Browns a 10-7 lead just over halfway through the second quarter.

After the Browns scored, the two teams traded three and outs on the next two drives, resulting in punts from both Tress Way and Jaime Gillan.

With just under three minutes to go in the half, the Football Team took over at their own 16 yard line, only running two plays for three yards before the two minute warning. Immediately following the break, Haskins stared down Inman, allowing Malcolm Smith to make a great play for an interception.

Three plays after the interception, the Browns offense took advantage once again, as Mayfield found Kareem Hunt for a nine yard touchdown reception to extend the lead to ten.

With the half winding down on defense for the Browns, Terrance Mitchell was able to strip Antonio Gibson on a short pass play. B.J. Goodson recovered the fumble on the play as time expired in the half with the Browns leading 17-7.

Haskins completed three passes for 45 yards to get his offense down to the Cleveland four, before a penalty gave the Football Team a first and goal at the two. On first down, Gibson rushed up the middle for a two yard touchdown, to cut into the lead. However, a missed extra point from Dustin Hopkins left the Browns lead at 17-13.

The Browns followed up the score with another three and out on offense, after not being able to recover from a nine yard sack of Mayfield on first down from Montez Sweat.

After the punt, the Football Team took over at midfield, taking on five plays to give themselves a first down at the Cleveland 16 yard line. Three plays later the Football Team converted a fourth down to give themselves a first and goal at the four, before a Haskins fumble dropped the ball back to the Cleveland 11 on second down.

Two plays after the fumble, Haskins found Inman for his second touchdown of the game, giving the Football Team the 20-17 lead with just over two minutes to go in the third quarter.

Facing their first deficit in the second half, the Browns offense responded well. As Chubb and Mayfield combined for most of the work, before Mayfield found Harrison Bryant on a three yard touchdown on the eleventh play of the drive to give the Browns the lead back in the fourth quarter.

The Browns defense had created turnovers throughout the entire game on the Football Team offense. The same was the case with the drive after the score, as Haskins once again got caught staring down a receiver, being intercepted by B.J. Goodson, the third interception of the day of Haskins.

Looking to put the final touches on the game after the interception, the Browns offense went to work. Mayfield found Beckham Jr. on a second down play for 15 yards, before Nick Chubb capped off the three play drive with a 20 yard touchdown scamper to extend the lead.

It was desperation time for the Football Team offense, but the Browns defense was stout to start the ensuing drive. Haskins was forced to drop a dime to keep the play alive on a long third down, before another 10 yard pass to Inman that was fumbled was recovered by Steven Sims Jr. to bring up second and one at the Washington 47.

After a Gibson run gave the Football team a first down, a strip sack from Myles Garrett of Haskins would give the Browns the ball back with their fifth turnover.

The Browns kept the ball for the majority of the rest of the game, mounting a ten play drive that lasted just over five minutes, resulting in a field goal. Two rushes for Peyton Barber in the Football Team’s possession after the field goal ran the clock out on the game as the Browns won 34-20.

The Browns offense scored over 30 points for the second consecutive game behind Nick Chubb’s two-touchdown day. On the other hand, five turnovers forced by the defense was a welcome site to see in the Browns route of the Washington Football Team.