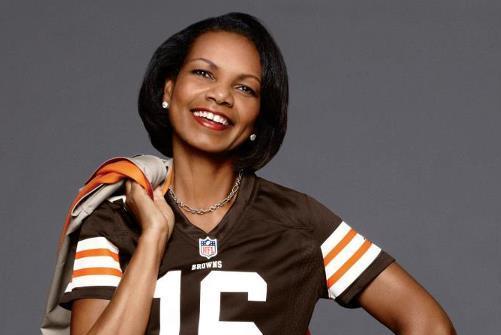 In perhaps the craziest story to ever circulate the NFL coaching rumor mill, Condoleezza Rice is a legitimate candidate for the Cleveland Browns head coaching job.  Despite having zero NFL coaching experience of any kind, this rumor actually exists right now.

This was reported by top NFL analyst Adam Schefter earlier today in shocking fashion.  If she does not interview for the coaching job, there is a stronger chance of her becoming a consultant.  Rice was the Secretary of State under President George W Bush from 2005 – 2009.

Her sole football connection was sitting on the College Football Playoff selection committee from 2013 – 2016.  She is close friends with Dee and Jimmy Haslam and that could be the driving force behind the report.

The Haslam’s are looking to rebuild their reputation around the league after some very strange moves since taking over the Browns in 2012.

This would be just another in the long list of headlines the majority of fans likely don’t want them to make.

Be sure that if this does in fact happen, everyone will have an opinion, and most will probably not be kind.

Even in a bye week, the Browns can’t resist making some interesting headlines.