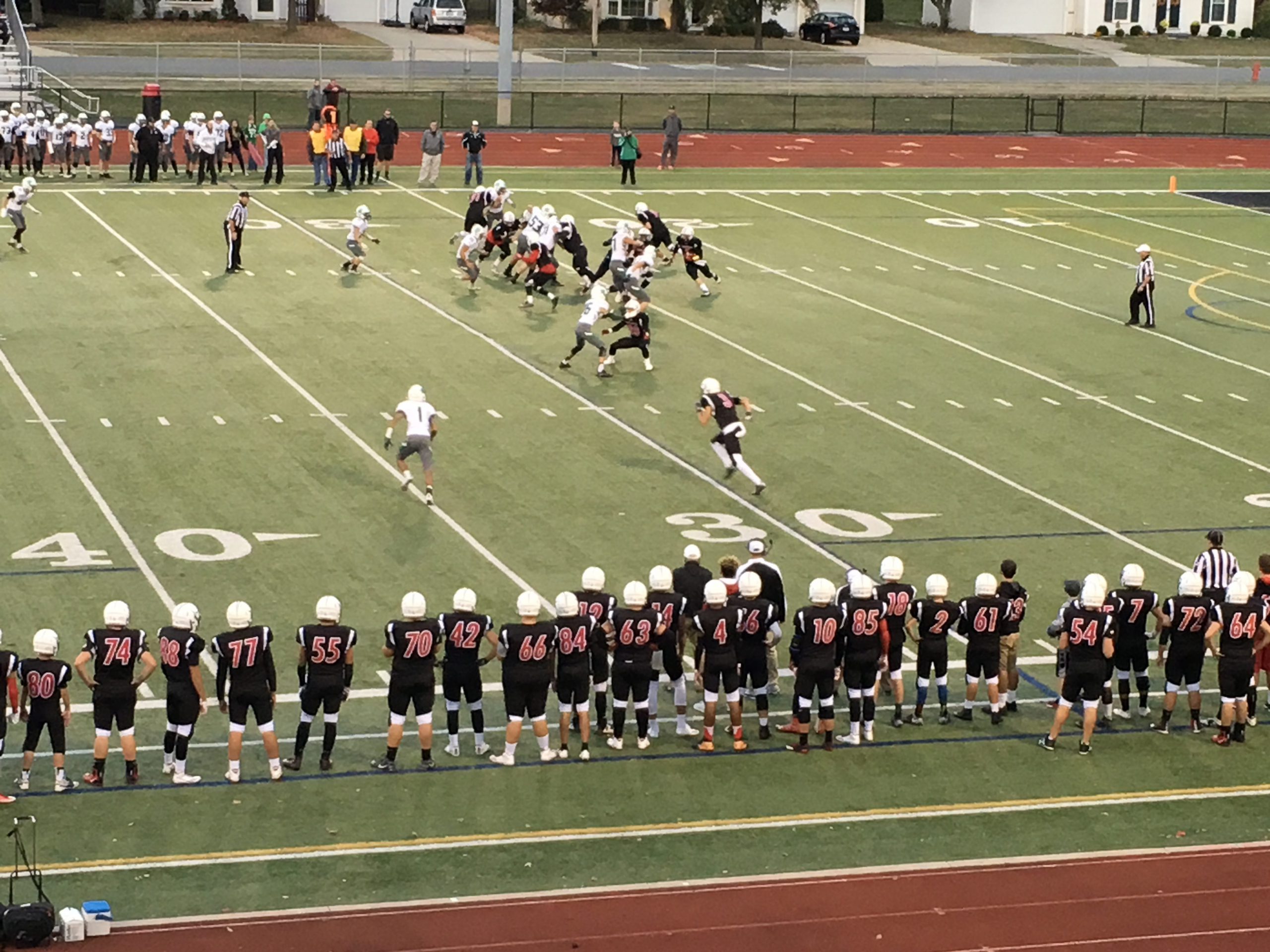 In a game filled with momentum swings, untimely turnovers, and one very long fourth-quarter drive, Columbia scored with 11 seconds left in the game when junior Mike Lovell scored from the 2-yard line on his only carry of the game.  On the drive, Columbia ran 16 plays for 67 yards with junior back Cole Schwartz featured on most of the plays.

Afterward, Lutheran West Coach Frank Petroff commented on the hard-fought game, “I was proud of our kids, they battled all night.  Columbia knows how to win, and that’s what we told our players all week long, but I was proud of them.  It was a great football game between both teams.”

The Raiders needed gutsy play on offense and just enough defense to pull out the win.  After losing junior sensation Brandon Coleman to a season-ending injury last week, the Raiders offense relied on role players to provide the punch for their power running attack.

Coach Jason Ward spoke on how his team stepped up on offense: “With Brandon being out, everybody’s going to have to do a little bit more, and we got that tonight from our guys.”

Coach Ward felt the Raiders played the game they needed to win, saying, “What we said all week is we wanted to rely on our strength, and our strength is our offensive line.  I’m really proud of those guys.”

Columbia’s first possession provided the only suspense in the quarter as they started at midfield and proceeded to the Longhorn’s 3-yard line before Alten was stuffed on 4th-and-goal.  Alten carried the ball on every down of the drive.

For the rest of the quarter, both sides traded possessions with an occasional big play such as Gerald McHendry’s 25-yard run or Jared Bycznski’s 46-yard pass to Cole Schwartz, but neither team could sustain the momentum.

Finally, in the middle of the second quarter, Columbia broke through, fueled by an interception return by Schwartz to the Longhorn’s five-yard line.  Two plays later, Schwartz scored his first touchdown of the night from the three-yard line.  With the PAT Columbia led 7-0 with 5:47 left in the first half.

The Longhorns’ next drive was stymied when senior QB Rory Zakareckis’ pass was intercepted by Jay DeLisle in the end zone and returned to the 19-yard line.

On the next play Schwartz fumbled the ball and senior Owen Albers recovered it at the 17-yard line.  Four plays later, Albers finished the drive himself, scoring from the 2-yard line.  The PAT tied the score at 7 with 1:11 in the half.

The turnover bug hit the Raiders again as they fumbled the ensuing kickoff, giving the Longhorns another chance inside the 20-yard line.  But the Longhorns squandered the opportunity and the teams went into the break tied at 7.

The second half continued a sloppy trend as Columbia fumbled on their first play.  As Alten was hit at the 25-yard line, the ball popped into the air and was snagged by junior Parker Watson at the 30 and returned 25 yards to the 5-yard line.

Columbia’s defense held, and helped by a penalty, they forced the Longhorns to turn the ball over on downs.

But Columbia was forced to punt, and then both teams traded possessions again.

After Columbia punted again, Watson returned the kick 20 yards to the 38-yard line.  A personal foul on the return pushed the ball to Columbia’s 47-yard line.

From there, Zakareckis found junior Shawn Naim in the slot who showcased his speed in outracing the defense for the score.  With the PAT, Lutheran West led 14-7 with 5:04 left in the third quarter.

Both teams then traded fumbles, with the Longhorns’ being costly as they gave up possession on their own one-yard line.

After a run for a loss and a false start moved the ball back to the seven-yard line, Schwartz ran in for his second score.  The missed PAT preserved Lutheran West’s lead at 14-13.

The teams traded possessions again, and early in the fourth quarter Lutheran West faced fourth-and-one at Columbia’s 33-yard line.  Zakareckis was stopped short on a QB keeper, and Columbia took possession with 8:02 left in the game.

From this point, Columbia’s power running game excelled as they wore down the Longhorn defense, picking up first downs and chewing up the clock primarily on the strength of Schwartz’s running.

Columbia moved the ball inside the 5-yard line where they used their final timeout with 27 seconds left.

Bycznski was stopped short on second down, but the officials stopped the clock with 11 seconds left as it appeared a Longhorn defender was injured on the play.  Lutheran West then called timeout to set up their defense.

Then with eight seconds left, Bycznski handed the ball to Lovell who ran in for the game-winner from the two-yard line.  The failed two-point conversion gave the final score of 19-14.

For the game Columbia gained 254 yards total offense on 52 plays, while Lutheran West totaled 211 yards on 55 plays.  Columbia relied on their running game, amassing 209 yards on the ground to the Longhorn’s 111 yards.  Outside of a couple of long completions, the passing game was a non-factor.

The strong winds contributed as many passes from both sides sailed long.  For the game, Columbia completed only two-of-nine passes, while Lutheran West completed 4-of-21 passes.  The teams combined for eight turnovers.

Columbia improves to 4-2 and hosts Clearview in a matchup for control of the Stripes division, while Lutheran West falls to 3-3 and travels to Brooklyn.

He filled some big shoes tonight in gaining 72 yards on 17 carries and two touchdowns.  His running in the fourth quarter drive helped set up the winning score.  Schwartz also had a 46-yard reception and contributed 4 tackles and an interception on defense.

Coach Ward said of Schwartz, “I’m really proud of Cole Schwartz who didn’t run a lot at tailback early in the week, who came in and got some really tough yards for us.”