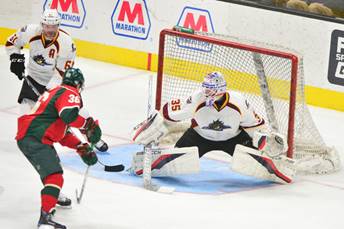 The Cleveland Monsters were defeated by the Iowa Wild on Monday at The Q by a final score of 3-0.

With the loss, the Monsters fell to 8-11-3-2 overall this season and with a .438 points percentage, Cleveland remains alone in sixth place in the AHL’s Central Division standings.

The Wild grabbed a 2-0 lead in the first period when Sam Anas potted an even-strength marker at 15:10 that Brennan Menell followed with a power-play strike at 19:25.

In the middle stanza, Iowa notched another even-strength goal to push their lead to 3-0 when Zach Palmquist tallied at 15:11 and, after a scoreless final frame, the Wild emerged victorious by a 3-0 final score.

Monsters goaltender Matiss Kivlenieks fell to 3-6-2 this season despite stopping 22 of the 25 pucks he faced while Iowa’s C.J. Motte improved to 2-1-1 between the pipes by virtue of a 34-save shutout performance.

Monsters Lack Power, Fall To Chicago 3-0
Cleveland Monsters Win Wild One 5-4 in Overtime Over Iowa At the Q