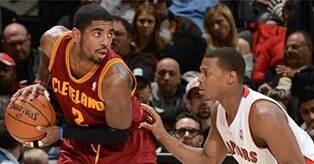 – Cavaliers (8-1, 1st in Central): Cleveland comes into tonight’s match-up atop the Eastern Conference standings after their gritty (100-93) victory over the Charlotte Hornets on Sunday inside Quicken Loans Arena.

Channing Frye came off the bench to lead all Cleveland scorers in Sunday’s matinee win with a season-high 20 points (6-12 downtown), three rebounds, and three blocks in just 23 minutes of playing time.

“Our second guys did a great job. It was good we were able to close the game out. We got stops and we made shots.”

Kyrie Irving leads the Cavaliers in scoring coming into tonight’s game with an average of 23.9 points per game. James trails just behind Irving with 22.9 points per contest.

Kevin Love continues to play well for the Cavaliers in the early stages of the season, averaging 20.6 points and a team-high 10.0 rebounds each night out.

The Cavaliers are now the only team in NBA history to make 10 or more three-pointers in each of their first nine games of a season. The Houston Rockets previously held the record with eight straight games of 10 or more triples to start an NBA season in their 2014-15 campaign. Cleveland is currently averaging 13.2 made three-pointers per contest.

– Raptors (7-2), 1st in Atlantic): Toronto will be seeking continued success after winning four of their previous five games, including a nice (118-107) victory over the New York Knicks on Saturday night inside The Air Canada Centre.

DeMar DeRozan led all Toronto scorers in Saturday’s win over the Knickerbockers, en route to 33 points (11-23 from the field), seven rebounds, four assists, and two steals in his 36 minutes of playing time.

DeRozan spoke to members of the media with regards to his continued development in the NBA, saying:

“Yeah, I always find ways I can be better mentally, physically, skill-wise. I always try to find something in the offseason and during the season as well.”

Jonas Valanciunas is averaging a double-double for this talented Raptors side, averaging 13.4 points and 10.1 rebounds per contest.

Raptors Head Coach Dwane Casey has his team focused and playing well. Strong post-play, aggressive cuts to the rim, and intelligent passing are all elements of Toronto’s game.

Tuesday’s matchup will be the second of four meetings between these two Eastern Conference foes this season (at TOR 12/5, at CLE 4/12).

LeBron James Has No Respect for Phil Jackson following Questionable Comments
Reign of The Big Three!!!