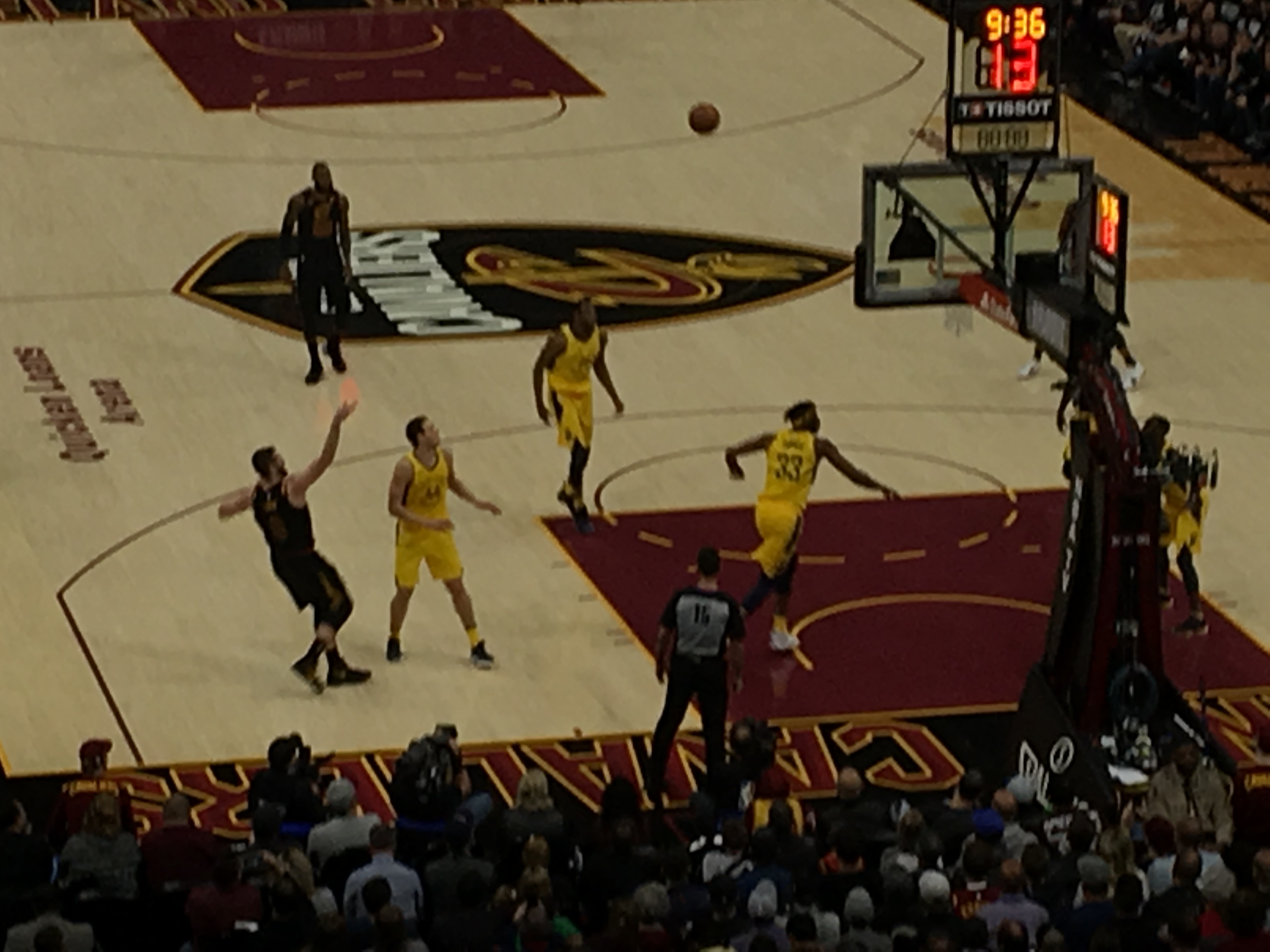 CLEVELAND– The Cavaliers struggled mightily on the offensive end as they fell to the Indiana Pacers in Game 1 of their playoff opening series, 98-80.

LeBron James saw a 21-game win streak in first round games snapped with the loss. It was the first time the Cavs have lost a first round game since he returned in the 2014-15 season.

James posted his 20th playoff triple-double with 24 points, 10 rebounds, and 12 assists, but overall, the Cavs struggled to maintain aggressiveness on the offensive end. Going back through the regular season, 80 points is the second lowest total the Cavs have put up this season. The lowest was 79 in a loss to the Miami Heat on March 27.

“I thought they attacked us on our offensive end,” head coach Tyronn Lue said after the game. “Defensively, getting up, pressuring us and being physical. We just have to own our space and be the same way defensively.”

Game 2 of this series is 7 p.m. on Wednesday in Cleveland. Until then, here are three takeaways from the loss.

For the Cavaliers, holding a team to 98 points would normally constitute a win. But in Sunday’s case, The Cavs simply weren’t aggressive enough on the offensive end. In the first quarter, they only scored 14. And despite storming back in the third quarter to narrow Indiana’s lead to eight points, they were outscored 25-15 in the final frame.

“Offensively, we didn’t make shots, we didn’t take shots and we just weren’t aggressive enough,” Lue said. “I thought their pressure really bothered us early, picking up full court with their guards.”

It certainly showed that Indiana’s pressure bothered the Cavs early. Turnovers in the first half, but particularly the first quarter, were killer. Indiana’s Victor Oladipo and Darren Collison did a particularly good job of pressuring the ball, and that in turn caused the Cavs to make poor decisions in transition. They coughed the ball up seven times in the first 12 minutes, costing them nine points as Indiana built a 19-point lead.

For the game, the Cavs had 17 turnovers that cost them 20 points.

On top of creating turnovers, Indiana tried everything it could from the jump to make things tough on James, who did not take a shot until there were about two minutes remaining in the first quarter.

“At the end of the day, they came in and they dictated the tempo,” James said following the game. “They were more aggressive. They played inspired basketball and they just took advantage of everything that we wanted to try to do.”

Victor Oladipo ended Sunday with a game-high and career playoff high 32 points on 11-of-19 shooting from the field that included six 3-pointers, six rebounds, four assists and four steals.

Oladipo was a member of the Oklahoma City Thunder the last time these two teams faced off in the playoffs. The Pacers acquired him in the Paul George trade along with Domantas Sabonis. Last summer, Cavs owner Dan Gilbert said he thought Indiana “could’ve done better than it did” with the George trade. Not surprising, considering Cleveland tried to get a three-team deal done that would have brought George to Cleveland.

“You could say it added fuel to the fire,” Oladipo said postgame when asked about Gilbert’s comments. “But that was so long ago. It came up recently, obviously, because we were playing the Cavs in the series, but I’m aware of what he said. Can’t control his opinion. All I’m focused on is myself and becoming the best Victor Oladipo possible.”

Sunday ends a 12-game winning streak that the Cavs had going in the first round, but are they in panic mode and looking to overhaul their offense?

Lue said the most important thing they need to change going forward is their mindset when it comes to being more aggressive and understanding that you “can’t ease into the playoffs.”

When LeBron James was asked after the game whether or not he was worried about how some of the younger guys will feel sitting with a loss for the next two days, James said it wasn’t a major concern.

“I get an opportunity to take the two days, me personally, and I hope the guys do the same thing to try and get their minds and bodies refocused on what we need to do to try and win a ball game,” he said. “I’ve always stayed even keel in the postseason. I mean, I’m down 0-1 in the first round. I was down 3-1 in the Finals. So, I’m the last guy to ask about how you’re going to feel the next couple days.”

LeBron: “I’m down 0-1 in the first round. I was down 3-1 in the Finals. I’m the last guy to ask how I’m going to feel the next few days.” pic.twitter.com/ungJMBCv6L