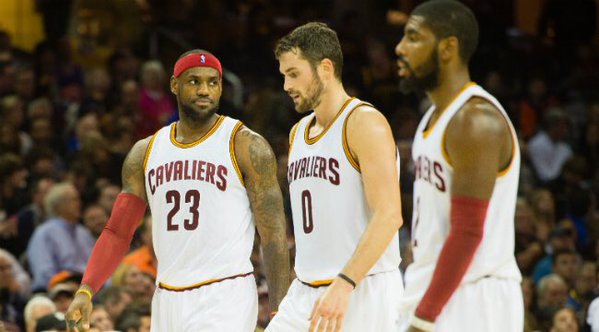 The Cavaliers welcomed in the red-hot Los Angeles Clippers on Thursday night. The Clippers had won 11 of their last 12 games entering play, an even more impressive feat, considering star power forward Blake Griffin has been injured.

Cleveland was in control most of the night, holding off the Clippers by a score of 115-102.

Clippers point guard Chris Paul accounted for 12 points in the first quarter, while the Cavs received balanced scoring. Jamal Crawford knocked down a rainbow jumper for three at the buzzer to put the Clippers ahead 31-28 heading into the second.

It was a back and forth contest to start the second quarter, but the Cavs finished strong to end the half and entered halftime with a 59-50 lead.

The “Big 3” of the Cavs, LeBron James, Kyrie Irving and Kevin Love combined for 30 points in the first half, while J.R. Smith scored ten, as well.

After a quiet second quarter, Paul got going again in the third, scoring eight points, but the Cavs kept up their attack and entered the fourth quarter on top 88-72.

LeBron had a big third quarter as well, scoring nine.

The Cavs kept it rolling in the fourth, coasting to a 115-102 victory.

LeBron and Smith each scored 22 points, Kyrie put up 21, and Love finished with 18.

It marks the fourth time in the month of January that Smith has scored at least 20 points, as the sharp-shooter knocked down 6-of-7 attempts from three-point range.

For the Clippers, there was not much offense aside from Paul, who scored 30, while dishing out nine assists.

After two losses in the last week, in which the trio of James, Irving, and Love were not as effective, Thursday night was one of the most balanced games in recent memory. The Big Three combined for 61 points.

That’s Why They Call Them “Free” Throws

The Cavs took advantage of almost all of their opportunities at the charity stripe, hitting 14-of-15 free throws as a team in the first half.

The Cavs were not as hot at the free-throw line in the second half, but finished the night making 18-of-24.

Cleveland has been near the bottom of the league in FT % most of the season, shooting just 72 percent, which puts them at 24th in the league.

Meanwhile, for the Clippers, DeAndre Jordan fell victim to the “Hack-A-Dre” strategy at the end of the third quarter, and then Head Coach David Blatt opted to go that route again midway through the fourth.

The duo of Tristan Thompson (The Terminal Tower) and Love (The Key Tower) gave the Cavs a huge edge in rebounding, as the pair combined for 19 of the Cavs’ 25 boards in the first half.

Thompson would finish with eight points and 12 rebounds.

Love, in particular, has played excellent the last two games, with a combined 35 points and 34 rebounds, which might have had more to do with the fact that he was guarded by Thaddeus Young of the Nets on Wednesday, and Paul Pierce of the Clippers, two mismatches that, to Love’s credit, he was able to exploit.

The Cavs improve to 30-11 at the halfway point of the season. Next up, the Chicago Bulls come to town for a Saturday night showdown on ABC. Tip-off is set for 8:30 PM. It marks the first time the two teams will meet since the regular season opener on October 27th, when the Cavs lost in Chicago.

LeBron James Named All-Star Starter
Video: Relive the Cavs Win Over the Clippers with These Highlights