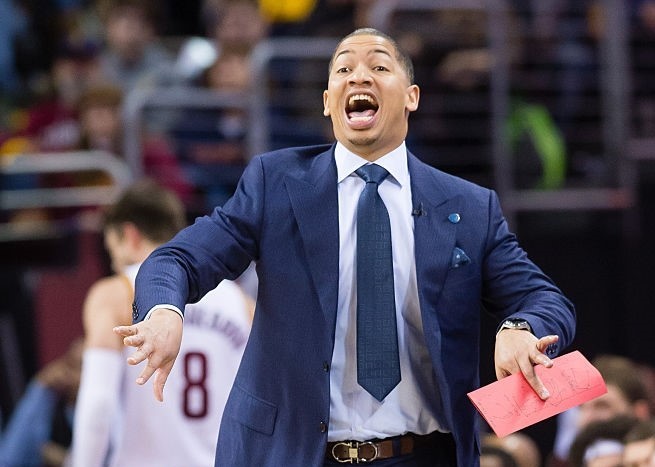 The Tyronn Lue era began Saturday night at Quicken Loans Arena, as the Cavaliers welcomed in the Chicago Bulls for a primetime showdown on ABC.

It was not a smooth debut for Lue, as the Cavs struggled out of the gate to start both halves, and would fall 96-83.

It was a low-scoring first quarter for both sides, as Chicago made it difficult for the Cavs, who shot just 21 percent in the quarter. The Bulls led 21-14 after one. It was the second fewest points Cleveland has scored in a first quarter in the 2015-2016 season. Cleveland scored 12 in the first quarter on December 26th in a blowout loss to the Portland Trail Blazers.

Chicago came into the game tied for number one in the league in terms of opponents’ field goal percentage (.426) tied with the San Antonio Spurs.

Chicago continued to control the tempo in the second quarter, as the Cavs showed little ball movement and trailed at halftime 44-39.

The matchup of Jimmy Butler and LeBron James was interesting to watch as Butler, who was questionably left off the Eastern Conference All-Star Starting Five, scored 13 points on 6-of-10 shooting in the first half, and held James to 4-of-12 shooting from the field.

James entered halftime with eight points, eight rebounds, and seven assists. He went 0-for-3 from the free throw line in the half.

It was new Head Coach Lue’s first opportunity to show what adjustments he can get his team to make after a poor first half, and the third quarter did not go Cleveland’s way. Chicago jumped out to a nine-point lead midway through the quarter.

Pau Gasol scored 11 points in the third quarter, and Chicago would close the quarter out strong, leading 72-58 after three.

The fourth quarter was more of the same as the Bulls’ tough defense, the Cavaliers’ lethargic offense, and one missed shot after another resulted in a Bulls’ victory by a score of 96-83.

LeBron finished with 26 points, 13 rebounds, and nine assists, but shot just 11-of-27 from the field.

Kevin Love put up 14 points and five rebounds, quite a drop-off from the last two games, in which he averaged 17.5 points and 17 rebounds.

Butler scored 20 points with nine rebounds on the night.

Gasol finished with 25 points, 10 rebounds, and six assists. The forward from Spain hit 11-of-16 shots from the field.

The Cavaliers shot 4-for-22 from beyond-the-arc on the night, as Smith was one of the few bright spots, hitting 2-of-6 attempts.

Meanwhile, Chicago was not deadly from three-point range, but took advantage of some opportunities, hitting 7-of-17 attempts. Nikola Mirotic was especially effective from long-distance, hitting 3-of-5, and would finish the night with 17 points off the bench.

After shooting a respectable 18-of-24 from the free-throw line on Thursday against the Clippers, the Cavs shot a dismal 9-of-22 on Saturday night against Chicago. LeBron missed his first three before hitting his next four attempts.

The Cavs fall to 30-12 on the season and have lost to Chicago both times they have played this season.

Next up for the Cavs, the Minnesota Timberwolves come to town for a Monday night meeting. Tip-off is scheduled for 7:00 PM.