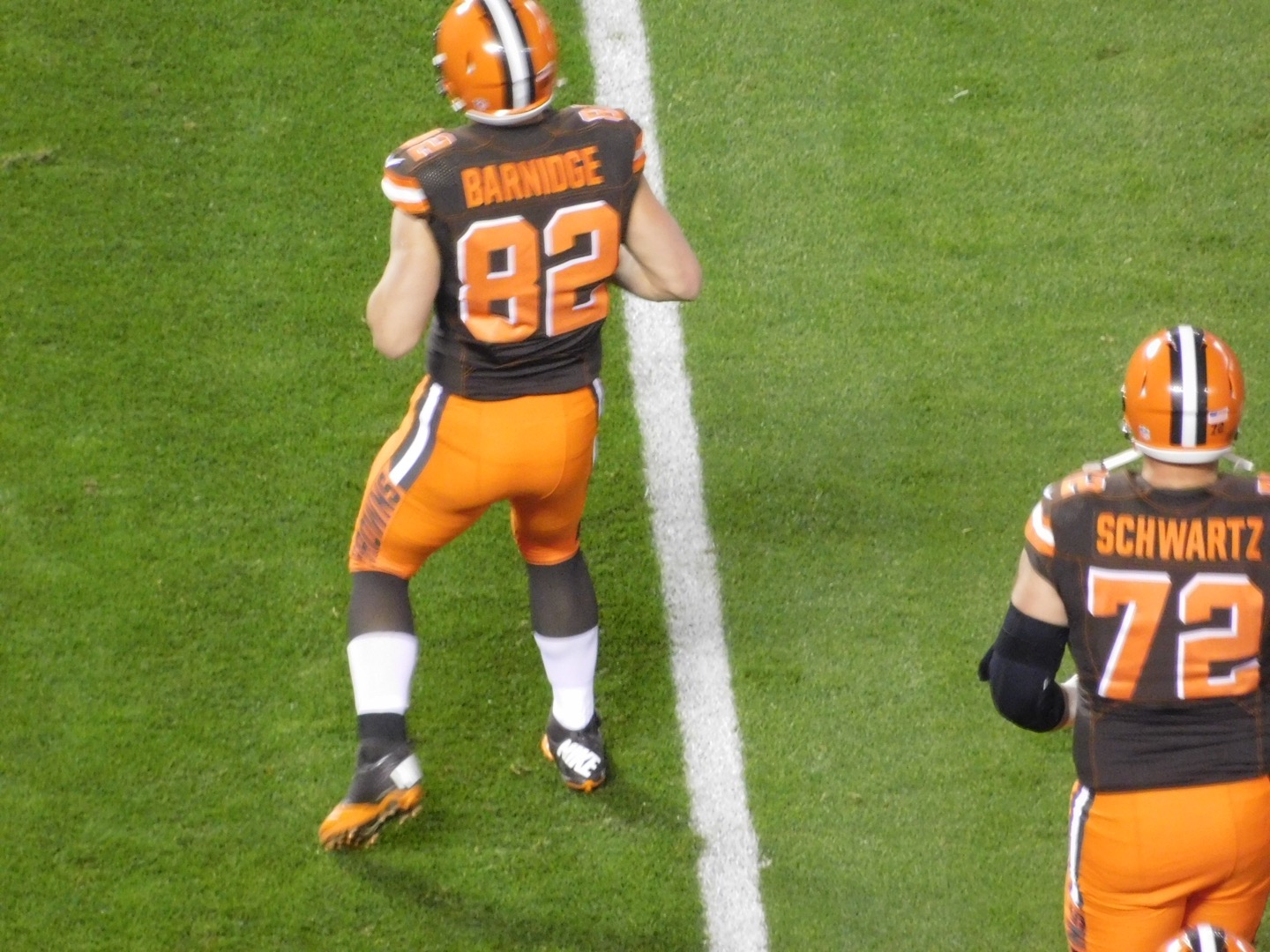 BEREA, Ohio – TE Gary Barnidge has been named the Cleveland Browns 2015 Walter Payton Man of the Year, the team announced Wednesday. Renamed in 1999 after legendary Chicago Bears Pro Football Hall of Fame RB Walter Payton, the accolade is presented to one member of each of the 32 teams, highlighting players’ community service and playing excellence.

Barnidge will formally be presented the award by Browns Owner Jimmy Haslam on Sunday prior to the team’s Week 13 game against the Cincinnati Bengals at FirstEnergy Stadium.

“We are proud to present Gary this award for his exceptional contributions on and off the field,” said Browns Head Coach Mike Pettine. “While Gary is statistically having one of his most productive seasons, it is the result of the unwavering work ethic and team-first mentality that he has carried throughout his NFL career, which has significantly impacted the Browns, as well as Cleveland and communities across the world.”

“Gary is extremely deserving of this honor for his consistent dedication to his teammates and the community,” said Browns General Manager Ray Farmer. “He is always eager to do anything possible that benefits the people around him, which is evident by his professionalism and his efforts to improve other people’s lives.”

“It’s an amazing feeling to be able to help others,” Barnidge said after Pettine informed the team that he had been selected as the Browns 2015 Walter Payton Man of the Year. “We as NFL players have the ability to reach so many kids by just saying, ‘Hey,’ or spending time with them, and that’s a huge aspect of being an NFL player. No matter what you do, you never know what that person is going through, and just a little gesture can change their day or their whole outlook on life. Through AFWB (American Football Without Barriers), we are also trying to help build the sport from the ground level up, not just by watching but by helping kids play and enjoy the sport that we enjoy playing so much.”

With three 100-yard games this year, Barnidge became only the fourth Browns tight end all-time to eclipse the century mark three times in one season and is one of only two NFL tight ends who have accomplished the feat three times in 2015. His seven touchdown catches are also tied for the second most ever by a Browns tight end in one year.

In his career, Barnidge has played in 102 games with 33 starts, including 40 games with 22 starts as a Brown in the past three seasons, and has collected 99 receptions for 1,361 yards with 10 TDs. The Louisville product is also a presence on multiple special teams units, totaling 47 career special-teams tackles.

During his time in the NFL, Barnidge has been a consummate teammate with both the Browns and Panthers and values making not only an impact in Cleveland and Charlotte but also across the globe. Since even before his NFL debut, Barnidge has engulfed himself in helping others on and off the field.

Barnidge helped establish American Football Without Barriers (AFWB, www.AFWBcamp.com), a simple concept with a global impact that brings football to underprivileged kids across the world. Co-founded in 2011 by Barnidge, New York Jets RT Breno Giacomini and college roommate Ahmed Awadallah, the international non-profit aims to develop American football in underprivileged countries. Starting with his time in Carolina and currently now with Cleveland, Barnidge has rallied teammates and players from several NFL teams to give back during the offseason during trips to foreign countries. AFWB hosts its free youth football camps for kids throughout the globe, including many who live in orphanages. During recent trips to China (2013), Brazil (2014) and Turkey (2015), Barnidge and his foundation bring their NFL skills and football knowledge to grow the sport in new parts of the world through service and leadership, including when the group hosted a women’s camp in Turkey. Ultimately, AFWB hopes to one day help facilitate college football scholarships for students outside of the United States, similar to the growing trend in other sports like college basketball.

His commitment to others directly extends to Northeast Ohio individuals in need, particularly youth in the region. Barnidge is an advocate for OhioGuidestone, a local non-profit organization that aids children and families in Cleveland as it relates to residential care, foster care and community-based services. Immediately after each Browns home game through Samaritan’s Feet, Barnidge meets one child involved with OhioGuidestone on the field, where he gives the individual his game-worn cleats directly from his feet and also provides a pair of personal shoes for the recipient.

Through a season ticket program, Barnidge also provides tickets and other items to underprivileged youth from OhioGuidestone for each Browns home game.

Barnidge’s year-round generosity extends during the holidays, when he hosts kids for an annual shopping event at a local toy store. He also regularly conducts a winter scavenger hunt on Twitter, allowing him to engage with and provide members of the Dawg Pound gifts during the winter holidays.

A movie aficionado who hopes to one day be a movie critic, Barnidge also gives back to Browns fans with a weekly movie giveaway. Each Wednesday night, he tweets a movie-related trivia question, with the first 10 people answering correctly being treated to a movie with Barnidge and his teammates the next night.

Throughout the season, Barnidge consistently embodies the Browns First and Ten community message, which focus on volunteering to impact the Cleveland community and inspiring all Browns fans to give at least 10 hours of service each year.

As the Browns’ Walter Payton Man of the Year, the NFL will provide a $5,000 donation to a charity of Barnidge’s choice on his behalf.

From the league-wide designees, three NFL finalists will be selected to be honored during the week of Super Bowl 50 in San Francisco. The 2015 Walter Payton NFL Man of the Year Award will be presented on Saturday, Feb. 6, during the Fifth Annual NFL Honors, where the league will salute its best players, performances and plays from the season.

The Man of the Year award has been given annually since 1970.