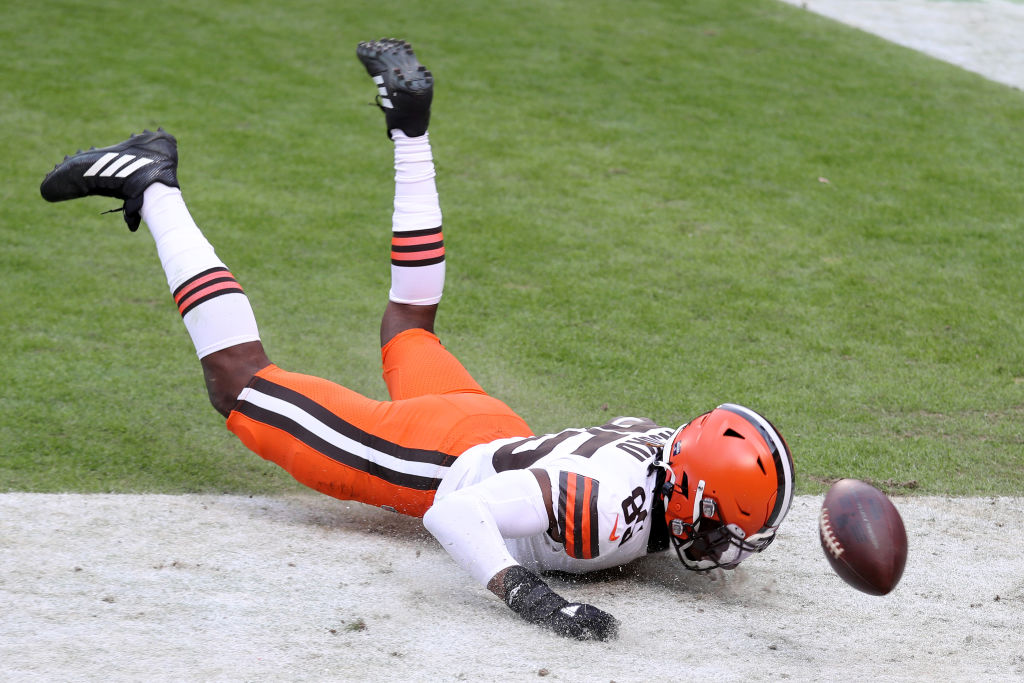 The Cleveland Browns traveled to Missouri to take on the defending champion Kansas City Chiefs in the Divisional Round of the playoffs. Baker Mayfield and the Browns offense were able to move the ball but failed to find the endzone early, falling behind 19-3 at the half.

Mahomes would leave the game in the second half with a concussion before the Browns began their comeback efforts. Finding themselves in a one-possession game late, the offense failed to take advantage of opportunities in the fourth, and the defense failed to stop a flailing Chiefs offense late as they fell 22-17 at the hands of the Chiefs.

The game opened up with the Chiefs on offense, looking for a hot start from their rested starters after the first-round bye. Mixing in the run between some big passes from Patrick Mahomes, the Chiefs methodically marched down the field for an opening possession score.

After the score, the Browns offense looked to keep pace with the defending champions. The Browns got things going early on the drive, mixing in a healthy dose of Nick Chubb on the ground, and Mayfield in the air.

The offense would reach the red zone before things went awry, a pass from Mayfield to Landry went backward on the end around play, before a nine-yard sack brought an eventual third and long. After failing to convert the long third down, a long Cody Parkey 46 yard field goal cut into the deficit.

After an incompletion to open the ensuing drive, Mecole Hardman found a seam around the edge for 42 yards into Cleveland territory. Mahomes would be perfect in the air the rest of the way, leading the Chiefs right down the field once again. After the Chiefs offense reached the 10, an offensive holding penalty seemed to have stalled the drive. However, Mahomes had other plans, finding Travis Kelce across the middle, who then leaped five yards into the end zone after reaching the line to gain.

With the Browns now down 10 points into the second quarter, they desperately needed to put something together to stay in the game early. Mayfield would find Donovan People-Jones for 23 yards into Chiefs Territory before an offensive holding penalty would stall all momentum. Two straight incompletions followed by a third-down pass that ended up back in the arms of Mayfield for a loss of eight forced a Jamie Gillan punt.

After the punt, the Chiefs offense stayed hot, while taking their time to move down the field. Mahomes would battle out of down and distance twice on the drive to break into field goal range before a penalty stopped their respective momentum. Two straight incompletions before a five-yard loss forced a 50 yard Harrison Butker field goal, as the Chiefs took a 16-3 lead over the Browns late in the first half.

Taking over with just three minutes to go in the half, the Browns put together the two-minute offense to try to stay in the game at the half. An offensive pass interference penalty seemed to put the Browns in a bad spot, but Mayfield found David Njoku for 26 yards on the next play to give the Browns a much needed first down.

Two plays later Mayfield found Higgins on a deep crossing route. Higgins found a lane towards the end zone on the play, however, a controversial non-call on a hit from Chiefs linebacker Daniel Sorensen would cause disaster for the Browns. The hit would jar the ball free just before Higgins found the goal line, as the ball went out the back of the end zone to give a touchback to the Chiefs offense.

After the turnover, the Chiefs offense took over with just over a minute to go in the half. Looking to take their time after immediately facing a quick third down, Mahomes converted before the Chiefs went into two-minute mode. Mahomes found success in the air to lead the Chiefs to a long field goal just before the half as they led 19-3 at halftime.

After the half, the Browns came out flat offensively, as two straight incompletions immediately forced third and long. Mayfield scrambled to make something happen on the play, seemingly finding a lane to Njoku, however, Chiefs safety Tyrann Matthieu jumped the pass for a quick interception three plays into the second half.

The Chiefs were given a short field offensively with an opportunity to put the nail in the Browns’ coffin. Fortunately, the defense stepped up to slow down Mahomes and the hot offense to force a field goal attempt. Butker, who had been shaky earlier, missed once again on the attempt to keep the score as it were.

After the missed kick, Chubb got the momentum going for the Browns on offense, opening the drive with runs of 23 and 18 yards to threaten quickly. Mayfield piled in 18 more two plays later on a connection to Higgins. The drive seemingly stalled in the red zone for the Browns, as they faced a third and one before Mayfield found the yardage on a scramble up the middle. After converting, Mayfield would find Landry on the sideline for a toe tap touchdown, drawing closer to only be down nine.

Mahomes helped lead the offense to near midfield before facing a short third down. Mahomes scrambled for the yard to gain on the play, falling short after a hit from Mack Wilson. Mahomes would enter concussion protocol after the hit, forcing him out for the remainder of the game.

Chad Henne would come on to replace Mahomes for the remainder of the game, but the Chiefs had a short fourth down at hand. On the conversion attempt, a pitch outside to Williams would find 12 yards to convert the play. The drive would stall after that, as the Browns defense stepped up to force a field goal.

After the field goal, the Browns offense once again stepped up to the challenge. Putting together an impressive 18 play drive before Kareem Hunt found himself in the end zone on a three-yard run to pull within five four minutes into the fourth quarter.

After the score, the backup Henne would find success in the air. Finding Hill for 23 yards on the opening play of the possession, before Kelce three plays later for 24. After the play, an illegal crackback penalty on Rickie Seals-Jones forced the Chiefs back out of the red zone before Henne flailed an interception into the arms of Browns safety Karl Joseph in the end zone for a touchback.

After the interception, the Browns had an opportunity to take the lead with their next possession. After putting together a hard-fought first down, even needing a Mayfield sneak on fourth and inches, the Browns were forced to punt after the drive stalled with the next set of downs.

Taking over with just over four minutes to go in the game, it was up to Henne to keep the Chiefs offense on the field to seal the game. With the Browns only having one time out, it would only take two first downs to do so. After the first down play was stuffed for only two with the Browns defense playing the run, the Chiefs opted for the passing game. Henne found Hill for four before finding Williams for five for the first necessary first down.

Another two-yard run on first down followed by a Myles Garrett sack on third down put the Browns in business. To no avail, as Henne found a lane on third down for 13 yards just short of the first down. On the fourth-down play, Reid dialed up a short bootleg pass to Tyreek Hill, despite seemingly just trying to draw the Browns offsides.

On the play, Henne found Hill in the flat, who then fell down once he reached the line to gain before a kneel down ended the game. The Chiefs beat the Browns 22-17 to set up a matchup with Buffalo next week in the AFC Championship game, as the Browns season comes to a heartbreaking close.