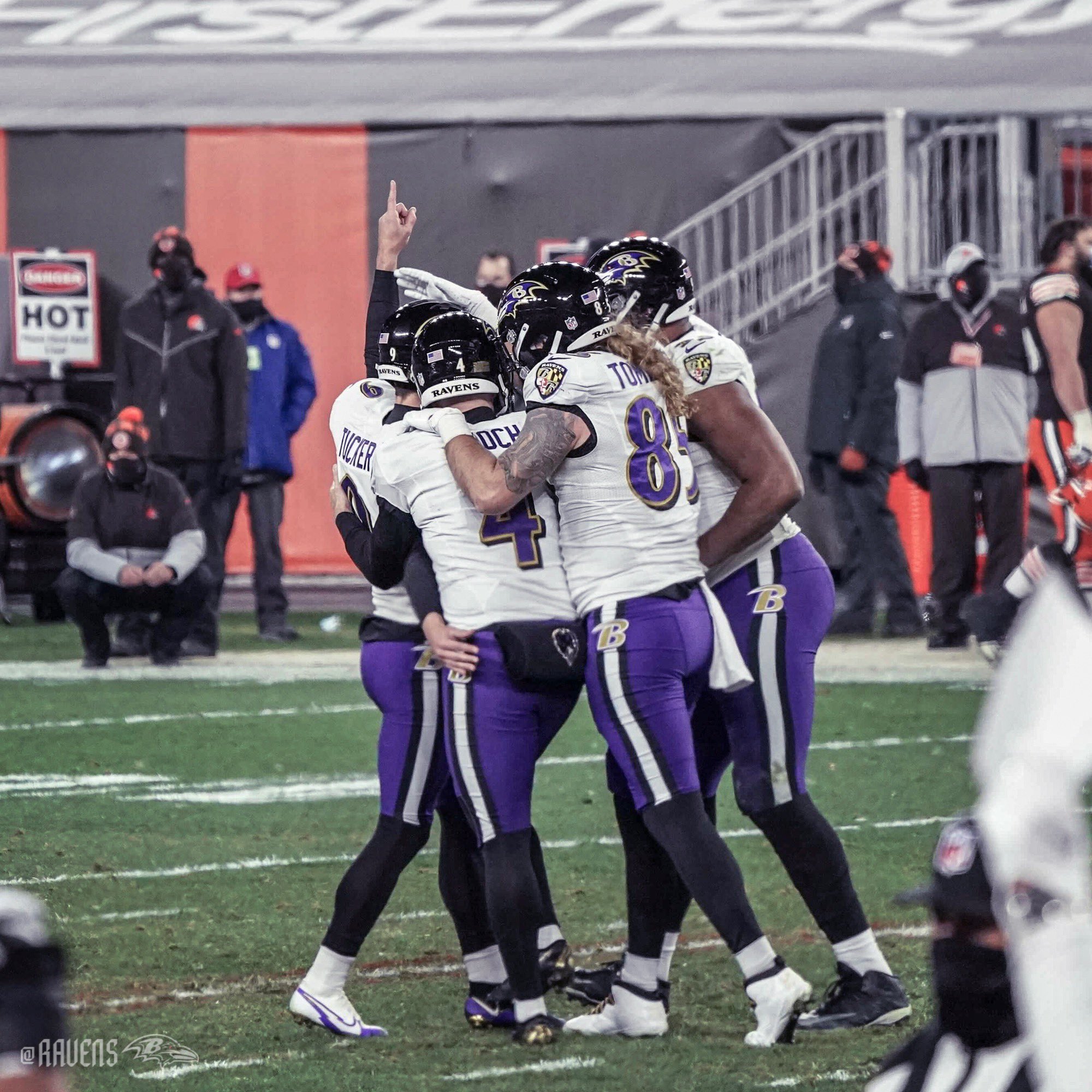 The Cleveland Browns hosted the Baltimore Ravens in a big time late season showdown Monday Night with huge playoff implications on the line. The game lived up to its billing, as both teams battled adversity to put on a thrilling show in prime time. Baker Mayfield found himself down two scores entering the fourth quarter, only to overcome both with touchdown passes to take the lead late in the game. On the other side, Lamar Jackson overcame cramps that sidelined him until crunch time, to come back to lead the Ravens over the Browns 47-42 with two late scores.

The Browns opened the game on offense, putting together a long opening drive for a score. Mayfield picked apart the zone defense from the Ravens, while Nick Chubb added in some big plays in both the run and the pass to set themselves up with first and goal from the seven. On first down, the Browns dialed Chubb’s number, who in turn galloped around defenders into the endzone for the seven yard score to take an early 7-0 lead.

After the score, Lamar Jackson escaped the rush a couple times early to help lead the Ravens near midfield before being forced into a third and seven from their own 46. On the third down play, Jackson would look for Marquise Brown deep, however a defensive pass interference penalty on a bump from M.J. Stewart would stop the big play but set the Ravens up deep in Browns’ territory. Four plays later, Jackson would find a seam up the middle from the five for a touchdown run to even the game.

The Browns next drive on paper would look pretty impressive, however the offense got forced into third down situations twice, only to get saved by defensive penalties that aided the offense into field goal range. On the next third down play, the offense would fail for a third time, this time not getting the penalty to move the chains. The Browns were forced to turn to Cody Parkey for the field goal attempt on the first play of the second quarter, but the kick went wide left, keeping things even at seven.

Jackson and the Ravens offense looked to take advantage of the decent field position after the missed kick, however Olivier Vernon and Sheldon Richardson had other plans. The two combined for sacks on second and third down respectively to force a three and out.

An illegal hands to the face penalty moved the chains on the first play of the ensuing drive for the Browns, however the offense failed to produce much after that, punting just three plays later.

After the punt, Jackson and the Ravens rushing attack put on a show to lead the offense to their next score. Jackson, J.K. Dobbins, and Gus Edwards combined for 80 yards on the ground to lead an eight play drive with no passes to take a 14-7 lead over the Browns nearly halfway through the second quarter.

With momentum swinging in the Ravens favor, the Browns offense found themselves desperate to score early. Big plays from Mayfield in the passing game started the drive, finding Jarvis Landry for 11 on a big third down, then finding Donovan Peoples-Jones for 37 two plays later to set up a first down at the Baltimore 22. After an eight yard run from Chubb set up a second and short in the redzone, the offensive line opened up a freeway on the second down play as Chubb went untouched up the middle for a 14 yard touchdown run.

The Browns defense forced a big three and out to follow up the score and bring up the two minute warning, as the Browns offense took over looking to score late in the half. Fortune struck the other way for the Browns however as they were forced into their own three and out to give Jackson and the Ravens just over a minute to put together a late scoring drive.

Two straight incompletions opened the drive offensively for the Ravens, as the Browns looked to avoid danger. However on the third down play, Jackson would be chased all over the field by the Browns defensive line before finding a wide open Mark Andrews for 39 yards. After the big connection Jackson would find a wide open hole for a 17-yard touchdown scramble to put the Ravens up 21-14 at the half.

The Ravens offense got the ball to open the second half looking to extend their lead. Doing just that, as the Browns defense fell apart on a quick four play scoring drive.

Facing an early third-and-three on the drive, Jackson found 44 yards on the ground while weaving in and out between defenders. After the big run, the defense sold out to bring Jackson down, but Jackson would hand off to Edwards who found 18 yards up the middle for a score to go up two scores early in the second half.

The Browns desperately needed a scoring response from their offense after the 14-point halftime swing. Mayfield and Kareem Hunt combined to help lead the offense on an impressive 11 play drive.

After finding themselves in Ravens’ territory, Mayfield would find Hunt deep down the left sideline for 26 yards to set up a first and goal, before Hunt would find the endzone up the middle on a five yard touchdown run to pull within 8 after Parkey missed the extra point try.

Following the Browns’ response, Jackson and Dobbins combined to drive the Ravens offense into Browns territory to open their ensuing possession. However, a false start penalty would halt the momentum, before two straight incompletions forced a Ravens’ punt.

The Browns took over deep in their own territory after the punt, whilst disaster struck for Mayfield on the opening play. Mayfield would try to zip a throw into a tight window from his own 13 yard line, however Tyus Bowser would make an incredible one handed play on the ball for an interception to set the Ravens offense up at the two yard line.

The Ravens offense took advantage of the interception, handing the ball off to Dobbins for a one yard touchdown run to put the Ravens up 14.

Mayfield needed to have a short memory on the next possession if the Browns were going to climb back into the game. Mayfield responded well to lead the offense on a long 12 play drive into the fourth quarter. Mayfield converted two big fourth down conversions on the possession, finding Landry across the middle for the first to keep the drive alive. Then finding Rashard Higgins on another fourth down play for a 21 yard score while avoiding the Ravens pass rush for a big bounce back score to pull within seven points.

Jackson exited the game following the previous Ravens’ drive due to cramping, being replaced by Trace McSorley as Jackson went to the locker room. The Browns defense took advantage of the change in signal callers to force a three and out and give the ball back to the surging offense.

After the quick three and out, the Browns took over looking to take the lead late in the game. Kevin Stefanski opted to turn to the bread and butter of the offense by using the run to set up the pass. Hunt and Chubb added in some timely big runs, and Mayfield found some room in the air before setting up a first and goal from the six.

Mayfield opted to just do it all himself after getting stuffed on the first two goal to go tries, running out to the left for a five yard touchdown scramble to put the Browns up one.

The Ravens turned to the run after losing the lead, driving into Cleveland territory before a fumbled third down snap would bring up a fourth down. However on the fumbled snap, McSorley would hurt his knee just as Jackson returned from the locker room. On his first play back, Jackson would make a play on fourth down, finding Brown leaking out behind the Browns secondary for a 44-yard touchdown.

The Browns took over after the two minute warning needing a score to tie the game. They did so in quick fashion, only needing four plays behind 75 yards passing from Mayfield. The Mayfield to Peoples-Jones connection opened the drive with a 30 yard catch down the sideline, before finding Landry for another seven. Now in Ravens territory, Mayfield and Hunt combined to go the rest of the way in two plays, the second being a 22 yard touchdown catch and run from Hunt to tie it up.

The Browns scored quickly and left some time for Jackson and the Ravens with just over a minute on the clock. Jackson was able to complete four straight to open the drive to drive to the Cleveland 37, before spiking the ball to set up a Justin Tucker game winning field goal attempt from the 41. On the attempt, Tucker winded up to nail the 55 yarder to take a 45-42 lead with 2 second left.

A last second desperation hook and ladder play was left as the Browns only hope after Tucker pounded the ball through the uprights. The Browns were able to move the ball around on the play, but in the wrong direction as the ball fell through a few rungs on the ladder before finding Landry in the wrong end zone for a safety, as the Browns fell to the Ravens 47-42.