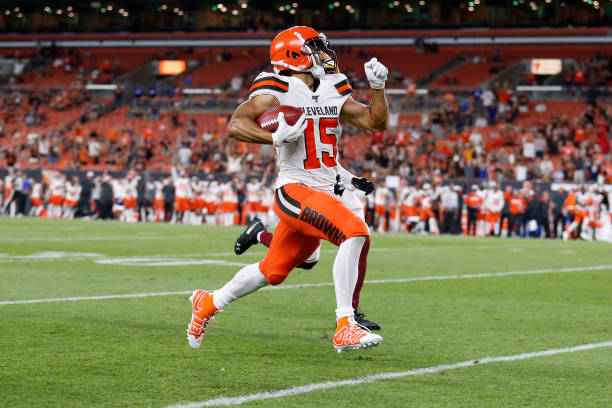 After spending two days in Westfield, Ind. participating in joint practices with the Colts,  the Browns will go to battle with their AFC counterparts in their second preseason matchup.

It remains unknown how much of the starters fans can expect in today’s game. Last week in a 30-10 win over the Redskins, the team’s starters played only the first series of the game. It was a productive one for both units as the Browns offense marched down the field for an 89-yard touchdown drive in just over 2 minutes. Even if the starters play will that group include wide receiever Odell Beckham Jr. who is dealing with a hip injury.

We’ll find out thoe details and more when the Browns and Colts take the field a 4 pm today. Here are three things you should watch for.

In the first preseason game, it was all eyes on some of the new blood on defense, most notably from Mack Wilson, who had a game to remember with two interceptions which one being returned for a touchdown. It was a strong start for the fifth-round pick and a difficult one to top, but he’s put himself on the map as a player fans must watch ahead of his rookie campaign. The same can be said for fellow rookie Greedy Williams. He’s got some high expectations of his own after hauling in an interception last week as well. He did have one play where a miscomunication led to Robert Davis slipping behind the secondary for an easy touchdown. Better to have those things happen in the preseason though than a regular season game. Greedy will only get better from here.

On the offensive side of things, there’s one potentially underrated storyline that must not be forgotten: who will be Baker Mayfield’s backup? It may seem insignificant, but the backup quarterback role is an important one. God forbid something happens to Mayfield, the team needs to have a reliable player to take the reigns. The assumption is that it’ll be Drew Stanton as Mayfield’s primary backup. He’s got the veteran experience and is a respected voice in the locker room. However, his lackluster performance in the preseason opener (3-for-8, for 63 yards, with some illadvised throws along the way) may have opened the door for say, Garrett Gilbert to prove himself worthy of the role. Gilbert was 14-of-22 for 135 yards against Washington. If he continues to play well int he preseson he could overtake Stanton.

3) Does the Hollywood story continue

Who could not forget about the Damon Sheehy-Guiseppi’s incedible, made-for-Hollywood story? After ripping off that 86-yard punt return touchdown last week, he’s a player everyone is watching and rooting for. With Antonio Callaway set to serve a four-game suspension when the season begins, the Browns are going to need a reliable punt and kick returner in his absence. Sheehy-Guiseppi could certainly earn the job but it’s gonna take more than one punt return touchdown to do the trick. If he can show some consistency throughout the preseason though, the Browns may be hardpressed to let him go by roster cutdown day.

Where to watch: Catch tonight’s game  at 4 PM EST on 92.3 he Fan on radio and on the NFL Network or News Channel 5 – WEWS

Odell Beckham Jr. vows to be ready for Browns season opener
Five Takeaways from the Browns 21-18, preseason win over the Colts