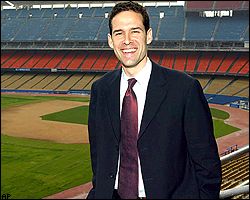 Joel Sherman of the New York Post first broke the story that the Cleveland Browns have hired Paul DePodesta as Executive Vice President.

Chris Mortensen of ESPN referred to DePodesta as the team’s “Chief Strategy Officer.”

DePodesta was the General Manager of the Los Angeles Dodgers from 2004-2005, and most recently served as the Vice President of Player Development and Scouting for the New York Mets from 2010 until now.

He last worked in pro football in 1996 with the CFL’s now-defunct Baltimore Stallions, when he was in his early 20s.

He played college football at Harvard.

DePodesta is an analytics man, just like Sashi Brown, and it appears owner Jimmy Haslam is taking the Browns into a new age of football analytics.

“Paul will help members of our player development, high performance and analytics departments maximize their efforts,” Haslam said in a team statement announcing the hire. “There are many areas that we have not fully capitalized on that will enhance the growth and performance of our players over time.”

It is another bizarre move by Haslam to fill the top of the Browns’ front office with non-football guys, but hey, the Mets did make the World Series in 2015. At least he didn’t grab someone from the Phillies.

DePodesta is the model for Jonah Hill’s character in the movie “Moneyball.” His first job in baseball was with the Cleveland Indians. Can’t make this stuff up.

Deal or No Deal: Will The Browns Sign Their Impending Free Agents?
Browns to Chat with Panthers Defensive Coordinator McDermott About Coaching Job