Browns Grind Out 20-3 Win Over Giants, Stay Ahead in Playoff Race 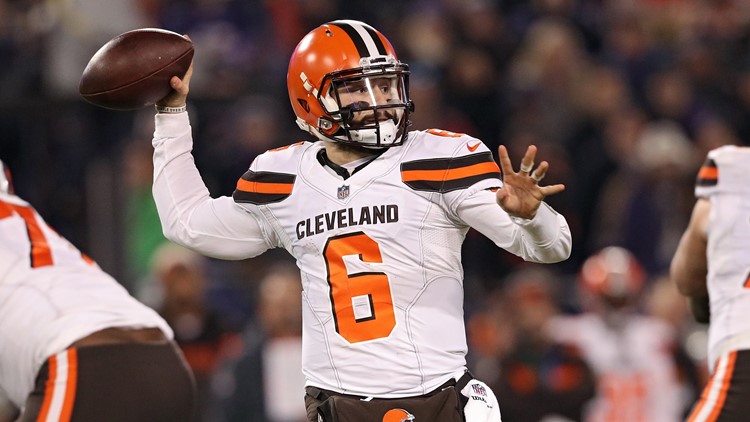 With meaningful December and possibly January football on the horizon for the Cleveland Browns, they got flexed into a Sunday Night Matchup in primetime on the road against the New York Giants. Baker Mayfield continued to play well per his stretch of games lately, as the Browns grinded out a slow moving 20-3 win over the Giants.

Dion Lewis started the night off with a bang for the Giants, returning the opening kickoff all the way to the Cleveland 48 yard line to set the offense with great field position to open the game. After a hard fought first down by Wayne Gallman Jr., quarterback Colt McCoy would connect with Sterling Shephard for 22 yards into the redzone on two plays later. The Browns defense would tighten up to force a fourth and five from the eight, before snuffing out a fake field goal attempt to force a turnover on downs.

After the turnover, the Browns offense would feature a healthy dose of both run and pass on a time consuming ten play drive. Despite bleeding the clock, the Browns only moved the ball just barely into Giants’ territory before the drive stalled. The offense would be forced into a fourth and two from the Giants’ 43, when head coach Kevin Stefanski opted to go for it himself. This time however, it was the defense for the Giants that stepped up to force an incompletion intended for Austin Hooper.

The Browns defense seemingly had McCoy and the Giants dead to rights on the ensuing possession, immediately forcing a third and six to look to force a three and out. McCoy had other plans, finding Darius Slayton for 35 yards down to Cleveland 18. After the big play, the Browns defense tightened up once again to force a 37 yard Graham Gano field goal, as the Giants led 3-0 late in the first quarter.

Mayfield and the Browns passing attack got hot after the Browns field goal to lead the offense on its own scoring drive. Mayfield found five different receivers en route to the end zone, including two receptions a piece for tight ends Austin Hooper and Harrison Bryant. Facing second and goal from the six, Mayfield scrambled up the middle for four yards, before finding Hooper in the back of the endzone from two yards out to put the Browns up 7-3 into the second quarter.

After surrendering the lead, the Giants offense continued to successfully move the ball down the field on the Browns defense. The balance attack went on a long 12 play drive, setting themselves up in the redzone with a first down from the 14. The red zone brought good fortune in the first half to the defense for the Browns, as they stiffened up once again to force another fourth down conversion attempt on fourth and two from the six. The safety tandem of Sheldrick Redwine and Karl Joseph would combine to stuff Gallman short of the line to gain, forcing another turnover.

Taking over with just over five minutes left in the half, the Browns opted to go slowly on their next scoring drive. After a big 14 yard run from Kareem Hunt opened the possession, Mayfield got hot for four straight completions leading up to the two minute warning, setting the Browns offense up in the redzone following the break. Following the two minute break, the offense opted to slow things down, taking all but 27 seconds off the clock before Mayfield found Jarvis Landry for a two yard touchdown pass.

A taunting penalty on Landry would move the extra point attempt back 15 yards, before Cody parkey missed the 48 yard attempt. After McCoy kneeled down for the Giants, the Browns led 13-3 at the half.

Mayfield opened the second half on offense finding Hooper for 12 to move the chains on the first play. Unfortunately the momentum would get stalled two plays later, as Dexter Lawrence sacked Mayfield for a loss of 11 on second down to bring up third and 22. Mayfield took his best shot at converting the down and distance, but fell just short after finding Donovan Peoples-Jones for 18.

Following the punt, the Giants offense would get going on their own opening possession of the half, moving the ball into Browns territory before stalling. Facing two third downs early on the drive, McCoy would battle out of both, finding Shephard for 7 to convert the first, before finding Slayton three plays later for 21 to move to midfield. Olivier Vernon would halt the drive there after dropping Gallman in the backfield to bring up third and 12, before an 8 yard Evan Engram reception brought up fourth down and forced a punt.

The Browns get their lone score of the second half on the ensuing possession to stretch their lead. Things weren’t looking great as the Browns faced third down from their own 19, before Mayfield found Rashard Higgins for 20 yards to keep the drive alive. The offense took off from there, finding themselves in the redzone two plays later after two passes of eight and 22 yards from Mayfield bookended a 15 yard rush from Chubb.

The Browns found themselves facing first and goal from the six, when Chubb found the endzone down the middle that got wiped out by a Jack Conklin clipping penalty. On the first down retry, Mayfield found Higgins for 17 down to the four, before a five yards false start penalty moved the offense back once again. Not to be denied however, an eight yard pass to Chubb set himself up for a two yard touchdown run to give the Browns a 20-3 lead into the fourth quarter.

Alfred Morris found a hole on second down on the ensuing possession for the Giants to move the chains. To no avail, as an offensive holding penalty would stall the possession, as two straight incompletions to follow a 10 yard pass brought out the Giants’ punt team.

With a three score lead late in the game, the Browns offense got a little complacent with their next possession. Hunt failed to find much room on the first two plays, before Mayfield found Peoples-Jones for 19 to move the sticks. After the first down, the Giants defense stepped up to force a very long third down and a punt three plays later.

After the punt, McCoy found a spark on third down to keep things alive and lead a scoring drive, finding Golden Tate for 14 yards down to near midfield. Following that up with three straight completions, including a big one for 24 yards to Engram to bring up a second and 5 from the Cleveland 21. The Browns defense would be able to force two straight incompletions following the run of big plays to force a field goal to keep the lead at 20-6.

An onside kick would be necessary for the Giants, needing two scores with just over four minutes to go in the game. Gano dropped a kick good enough for a scramble at the ball, with Bryant coming out of the pile with the Browns ball. An unnecessary roughness penalty would push the Browns back into their own territory at the 41. Bleeding clock being the only objective, D’Ernest Johnson found a seam on third down and nine for 21 yards, before three straight short runs brought out the punt team.

With the game in hand, the Giants offense looked to just put something together for their own mentality. However after two passes of nine and 12 yards from McCoy moved the ball near midfield, Larry Ogunjobi and Myles Garrett would effectively combine to end the game with a sack on first down as the clock ran down. With eight second left McCoy found Slayton for six yards on the last play of the game as the Browns win 20-6 and move to 10-4 on the year.