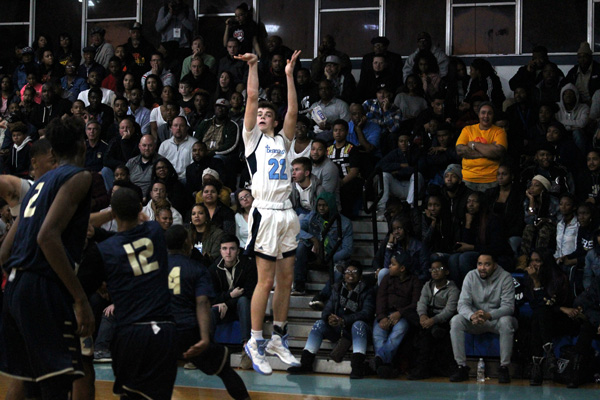 MENTOR, OHIO– Benedictine was as cold as the winds blowing through Mentor when Friday night’s game tipped off at Lake Catholic. The Bengals scored only four points in the first quarter and Lake Catholic used an 11-0 run to take a 25-14 halftime lead. Luka Eller, the Cougars’ 6-foot-7 sophomore center, was a dominating presence inside, racking up 10 points and seven rebounds by intermission.

It was more of the same formula for Lake Catholic early in the third quarter. A 3-point shot by junior forward Sean Fitzgerald at the 4:02 mark gave the Cougars their largest lead of the night at 36-21.

Benedictine coach Rob Stircula called timeout. He may not have known it at the time, but it turned out to be the best decision of the game.

Following the timeout, Benedictine suddenly came to life, going on a 13-5 run to bring the Bengals to within seven at 41-34 as the third quarter ended. Benedictine senior guard Chris Jefferson scored seven points during that stretch, but the best was yet to come for the Bengals.

Lake Catholic scored the first two baskets of the fourth quarter, but it was all Benedictine after that. The Bengals closed out the game with an incredible 29-11 run to win going away, 63-56. Jefferson had 12 additional points during the fourth quarter surge and finished as the game’s leading scorer with 23. Benedictine sophomore guard Jashun Cobb was also a key man for the Bengals. He came off the bench to score 12 points, all in the second half.