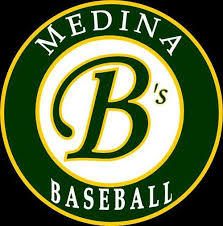 MEDINA, Ohio – The Medina Bee’s had to wait a few extra days to play their home opener, but even the cold weather could not cool off the red hot bats of the Bee’s. They beat the visiting Shaker Heights team 5 – 1. Shaker was down 5 – 0 after 6 innings but managed to score once in the seventh on a passed ball to avoid the shutout.

The Bee’s stung Shaker early as they scored two in the first inning when they started the bottom half of the inning off with a Pipoly single to right, followed by a RBI Triple by Senior Collin Winters to give them the 1-0 lead.
Later on a ball four passed ball to Peterson, Winters was able to come around to score and make the score 2-0. Medina would remain locked in at the plate as they scored 3 more in the second inning to extend their lead to 5 – 0 against senior Canyon McWilliams of Shaker.

The winning pitcher was Junior Alex Whittaker who pitched a complete game and looked strong throughout. He did run into a bit of trouble in the first inning as he loaded the bases, but had a key third out strike out to get out of it.

Whittaker and his battery mate Peterson, stayed in front of batters all night and it helped give the Bee’s the edge. Whittaker would throw all seven innings but give up zero earned runs.

The game was in question all day if it would be played, but the weather managed to corroborate long enough to get it played. There was a threat of a storm late in the fifth inning as the umbrellas started to come out with a rain snow mix in the air.

The win moves the Bee’s overall season record to 6-2. They have tomorrow off before getting back out on the road to take on Wadsworth on Friday April 8 and then Strongsville Monday April 11.

Special thank you to sideline reporter A. Winters for the stats and weather report.

For more information on this game or any game in North East Ohio, please contact Vince McKee on twitter at VinceTheAuthor.

Tribe Wins 7-6: Relive The Moments of the Indians First Victory Of The Season
WWE: WrestleMania 32 rewind and reflections