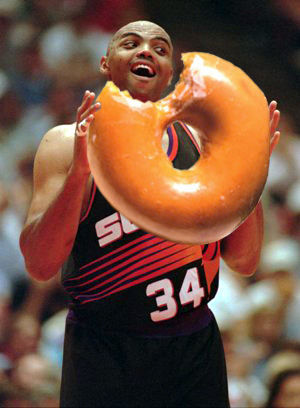 Charles Barkley stepped in it during the post-game “Inside the NBA” telecast on TNT.

He seemed to advocate the Atlanta Hawks attempting to injure a member of the Cleveland Cavaliers in retaliation for the Cavs looking to set the 3-pointer record during the fourth quarter of Cleveland’s 123-98 victory in Game 2 of the teams’ best-of-seven Eastern Conference Semifinal series.

Barkley, speaking of the Cavaliers continuing to shoot 3-pointers in the fourth quarter of the rout, said the Hawks approach should have been to “take someone out.”

That’s right, an NBA broadcaster spoke out in favor of a team looking to injure an opponent.

Barkley didn’t mention that the Hawks should have looked to defend the 3-point line a little better, or that Cleveland had put its starters on the bench for the entire fourth quarter. That wasn’t important to the rotund broadcaster, who, in his playing days, was nicknamed the “Round Mound of Rebound.”

Instead of manning up and playing defense like they cared, Barkley thought the Hawks should have went after someone.

Sir Fat-Boy obviously doesn’t remember what happened the last time a Cavaliers’ opponent “took someone out” during a playoff series. In the first round of the playoffs last year, Boston forward Kelly Olynyk took Kevin Love out in a cheap, dirty play that was intentional…regardless of how anyone tries to spin it.

Olynyk grabbed Love’s arm, locked it in the crook of his own arm at an awkward angle and twisted it until it popped out of the socket.

Love’s playoffs were over…and despite the fact that LeBron James put on one of the most impressive one-man shows in the history of the NBA Playoffs, the Cavaliers’ title hopes went down the drain.

In the NBA there is a shot clock. Teams have 24 seconds to put up a shot. The Cavaliers had already tied the record for 3-pointers in a game in the third quarter. It would have been virtually impossible for the team NOT to have captured the record in the fourth quarter.

Sure, they were running set plays and picking for each other beyond the 3-point arc, but that’s what the Cavaliers do…that’s their offense. Would Barkley rather the Cavaliers just dribbled the shot clock out without taking a shot? This was Game 2. The last thing the Cavaliers should have done was change things up and get out of the offensive groove they were in.

LeBron James made a great point after the game. He mentioned Golden State (you think he is obsessed with the Warriors?) and how they went after win No. 73. He asked if they shouldn’t have tried to win No. 73, With a record in sight you go for it. The Cavaliers weren’t showing anyone up…the Hawks had embarrassed themselves long before Cleveland tried to shoot a few 3-pointers.

TNT should suspend Barkley for his ignorant suggestion. He should be forced to apologize to the organization for putting the thought out there that the Hawks would be justified in injuring an opponent. There is no room for that in the NBA.

At the same time the Cavaliers should prepare themselves for quite the hostile environment in Atlanta for Game 3. If I know James and his teammates they are very much looking forward to entering a loud, rocking building…and leaving one that is deathly silent.