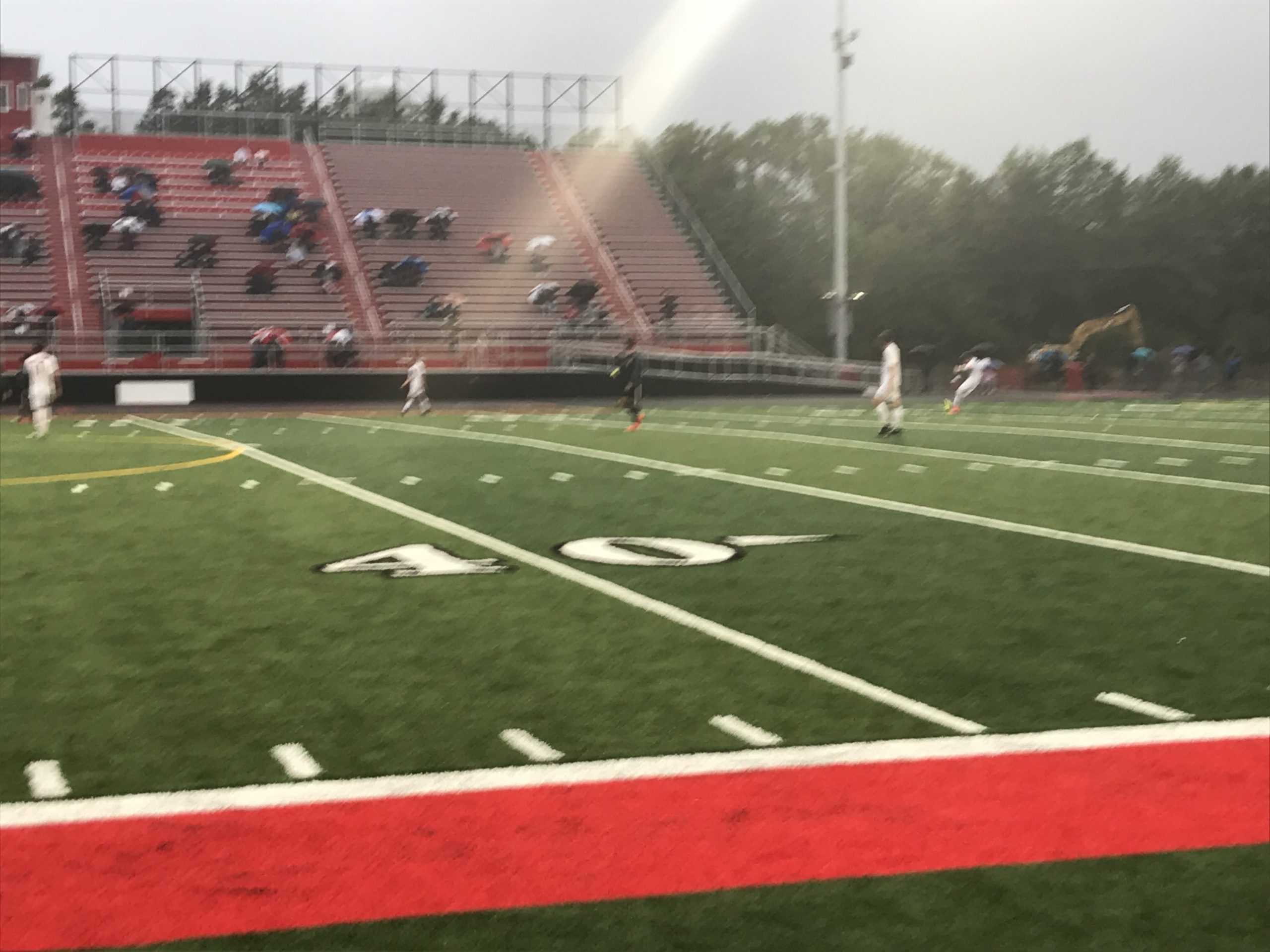 On a wet, misty night in Elyria the Avon Lake Shoremen boys soccer team handled the Elyria Pioneers 5-2.The Shoremen took control of the match early, scoring in the 4th minute. Junior Spencer Chippi played a nice looping through ball for senior Edison Lemanowicz to run on to and he calmly deposited his shot in the left side of the net to make it 1-0.Just a minute later junior Drew DelGiudice dribbled the ball right at the heart of the Elyria defense and was taken down to earn a free kick. His attempt looked like it was heading towards the upper right corner of the goal until the Pioneer keeper sprang to his left and deflected the ball out for a corner.

Shortly after that DelGiudice picked up a ball on the left side of the box and hit a hard ball across the six yard box but no Shoremen could get there to play the final touch.

Elyria earned one of there few chances on the evening on a quick counterattack in the 10th minute that found their left winger with the ball and a step on the Avon Lake back line, but his left footed shot trickled meekly out for a goal kick.

In the 15th minute Lemanowicz and Chippi continued their connection with two chances that almost doubled the Shoremen lead. First Lemanowicz returned the favor from earlier by finding Chippi running into the box, but his shot attempt after some contact went wide. Next, Chippi picked a Pioneer defender’s pocket and immediately put Lemanowicz in to goal, but this time the Elyria keeper was up to the task.

Junior Danny Lambert would check into the match and provide an instant impact as he beat his man down the right side of the field and made it to the end line before playing in a nice cross that Elyria was just able to boot clear.

In the 25th minute Lambert latched on to a ball just outside of the goal that the Elyria keeper had just punched skyward, and he was able to poke in a near post finish to make it 2-0.

2 minutes later Avon Lake almost put another one on the board after a DelGiudice free kick deflected and landed near the feet of senior Joey Caputo, but his shot sailed over the bar.

The Shoremen were rewarded for their consistent pressure in the 32nd minute as DelGiudice played a nice ball to senior Cam Salco on the left side of the box and he controlled and finished a tidy right footed shot to the right side of the goal to make it 3-0.

Elyria pulled one back almost immediately in the 34th minute after their left wing was able to beat his defender to the end line before leading a nice pass to the heart of the 18 yard box for an open teammate to rifle home near post to make it 3-1, which would be the half time score.

The second half began with a couple of great Shoremen chance to put the game away. First, Salco played a through ball that split the Elyria center backs and found Lambert streaking in on goal, but the Elyria keeper was able to fight off his hard shot and keep it out. A couple of minutes later Lemanowicz found Salco on the left, but again, his well-taken shot was saved by the sprawling Pioneer goalie.

The game got interesting in the 45th minute as the Elyria left winger, who was a problem for Avon Lake all game, fell down in the box after some light contact and was rewarded with a penalty kick that the Pioneers subsequently put away to reduce the Shoremen lead to 3-2.

But the Shoremen were up to the task, establishing control once again. In the 53rd Salco almost scored another off another ball played from the right to the left side, this time from Chippi, but his first time shot was again well saved.

Avon Lake struck again in the 58th minute after another quality DelGiudice free kick. He chipped the ball over the wall where it was eventually met by senior Andrew Jacobson, who headed into the mix in front of goal where junior Josh Lawniczak was ready to put it away, making it 4-2.

Then in the 64th minute a mazy run from DelGiudice through several Pioneer defenders and into the box led to a drop pass for sophomore Liam Reutter, who found Lemanowicz running into the box, but his shot barely missed to the right.

In the 69th minute Avon Lake put in another after Lemanowicz, who was stellar all game long, hustled to dislodge the ball from the Elyria defense and played a ball back to DelGiudice who took a great shot that the Pioneer goalie parried away but into the path of Lemanowicz, who tucked the rebound away to make it 5-2.

Things got interesting again in the 74th minute as Lambert was shown a straight red card by the referee, which put the Shoremen down a man for the final 6 minutes of the match. Avon Lake stymied Elyria during those minutes to see the game out in spite the disadvantage.

“Conditions were difficult tonight with the constant rain and being on the new turf,” said head coach Pete Klepek. “We adjusted and played some great soccer, and could have easily scored a few more. Now we have to refocus for a big game on Wednesday against North Ridgeville.”

The Shoremen outshot the Pioneers by a wide margin, taking 24 to Elyria’s 5, including 15 on goal. Kudos to the Elyria goalie for keeping the game close with several high quality stops among his 10 saves.

Lemanowicz’s two tallies bring his team-leading total to 8 goals, while Salco and Lambert both now have 2 goals on the year, and Lawniczak has 1. Senior Dino Pietromica earned the win in goal.

Varsity improves to 6-2-0 on the season and JV to 6-1-1, and the teams will face SWC foe North Ridgeville at home on Wednesday evening at 5 and 7pm.