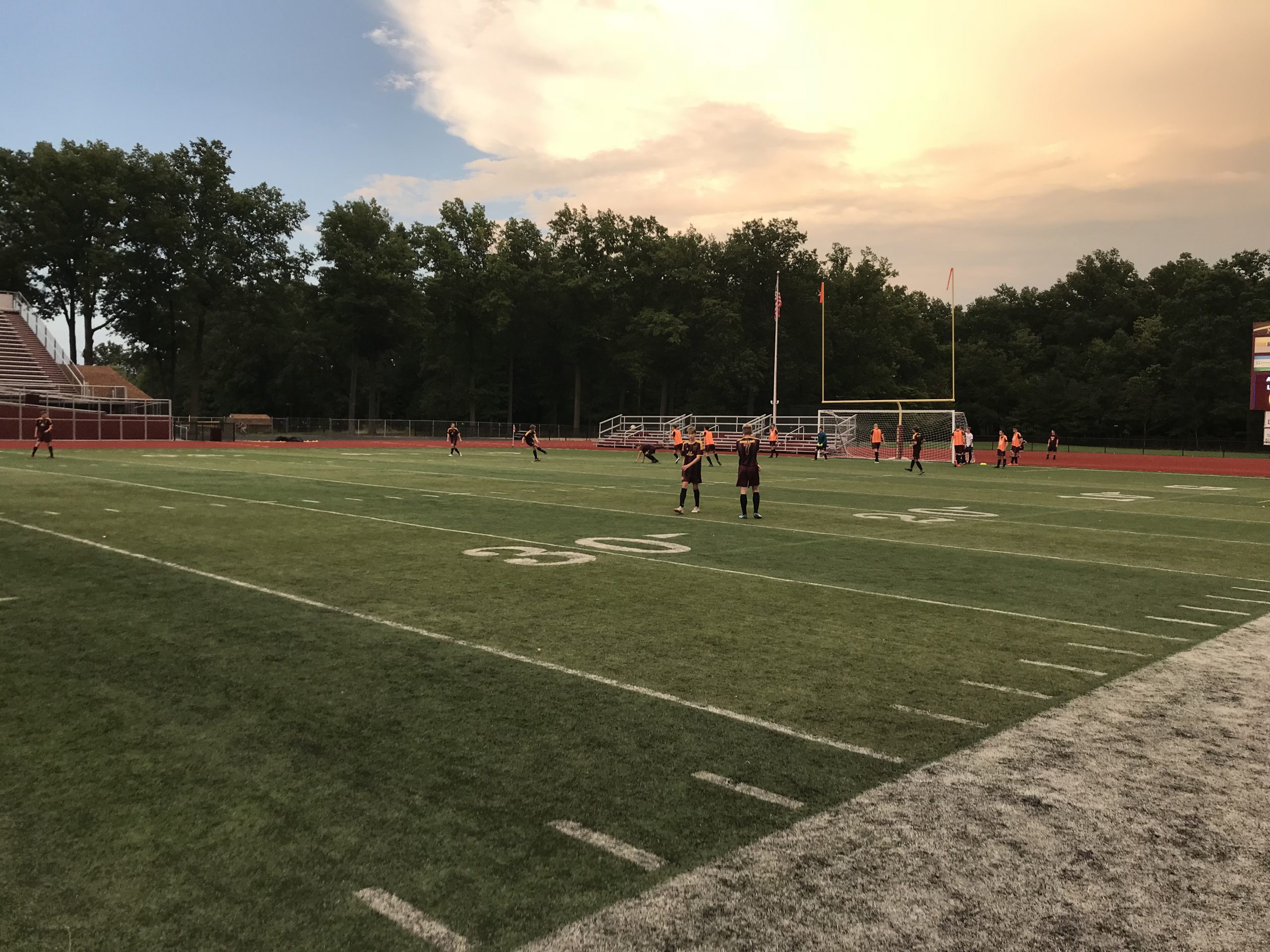 In a game that began late due to weather delays the Avon Lake boys soccer team scored late to put away visiting Lakewood 2-0 in an SWC matchup.

The Shoremen established control of the game early and tested the Lakewood keeper often. The final stats showed 17 Avon Lake shots and 8 on goal, but it felt like even more as they continuously applied pressure throughout the entirety of the game.

Beginning in the second minute of the game when senior Cam Salco picked the pocket of the Ranger outside mid and played it to junior Josh Lawniczak, whose through ball played in senior Edison Lemanowicz but in what would become a recurring this for Avon Lake, his shot after he cut back to his left foot missed the target.

In the 10th minute senior left back Colin Radca made an upfield run and was found by junior Drew DelGiudice, but his volley attempt missed high and wide.

The Rangers goalkeeper made the first of what would be many great saves 24 minutes in as DelGiudice hit a shot from the right side of the box across the goal that he pushed out then recovered to grab the rebound before any Shoreman could pounce.

The Lakewood keeper made another save shortly thereafter as Lemanowicz beat the offside trap and was one on one but his last touch got away from him just enough for he goalie to slide at his feet and block it away.

In the 19th minute the goalie made his best save of the night, again on Lemanowicz, who was played in by a diagonal pass from fellow senior Joey Caputo. Lemanowicz looked to have nearly deposited his shot into the right corner before the keeper made a full extension diving save to barely keep it out and maintain the 0-0 score line.

Avon Lake continued to lay siege to the Lakewood goal but was unable to find the net. Senior center back Andrew Jacobson earned a chance in the 33rd minute after he made a steal at midfield and continued his run, beating several Ranger defenders to the end line and crossing to the six yard box, but again the Rangers keeper managed to hold on to it. His save was crucial because junior Danny Lambert was on the door step waiting to finish.

Just one minute later Lambert had a golden opportunity fall into his lap as Lakewood gifted him the ball and he turned on his jets to break in on goal. He took his shot early but didn’t get as much on it as he’d like and the goalie secured the save.

Halftime offered a brief reprieve for Lakewood, but it was short lived as the Shoremen upped the pressure even more in the second half.

Lemanowicz again found himself in on the goal in the 44th minute after Lawniczak played him a nice headed ball that skipped over a Lakewood defender, but his driven shot fizzed just wide to the left.

Three minutes later a long throw in from the left side of the field managed to bounce its way to DelGiudice at the top of the box, but his volley attempt didn’t trouble the keeper.

Lemanowicz had yet another chance a minute later after he dribbled to the right corner of the six yard box and unleashed a shot that beat the goalie from a tight angle, but not the crossbar.

In the 51st minute the Shoremen almost broke the seal with a quick counterattack, as Salco picked up the ball at half and centered to DelGiudice, who pinged a ball into space on the opposite wing for Chippi to run on to. He then played a diagonal ball on the ground that split the Lakewood backs and found Salco once more, but his right-footed shot attempt was scuffed just wide left.

Avon Lake had two chances back to back in the 62nd minute, as a Salco corner kick was headed by Jacobson but blocked. Lemanowicz then used some hustle to win the ball from a Lakewood center mid and then quickly played in Lambert one on one with the goalie. But again his final touch was his undoing and the keeper was able to collect.

At this point, after so much domination with nothing on the scoreboard to show for it, it seemed like it might be one of those nights for the Shoremen. In the next 10 minutes they generated a half dozen more threatening opportunities, including a prime one in the 71st minute, after Chippi played Lemanowicz to the end line on the right and his cross made its way across the goal mouth to senior Kristof Nieschwitz, who could not quite turn it in to the goal from a couple of yards out.

Finally, after so much pressure and so many missed chances and great saves, Avon Lake broke through in the 72nd minute. Chippi played a lovely corner kick that Lemanowicz, who continually got himself into dangerous positions all game long, was able to flick with his head into the back of the net, making it 1-0.

Avon Lake could have packed it in and saw the game out as a 1-0 win, but was able to add an insurance tally in the 78th minute after Chippi hit a hard cross from the right side of the box that Lambert managed to run on to and power a first time volley that left the goalkeeper absolutely no chance and give us our final margin of 2-0.

It should be noted that while he did not show up in the stat sheet, junior Derek Stepak played a stellar match, winning his battle against returning All-State and All-Conference forward Marvin Gblah through tireless effort and great positioning. Senior Dino Pietromica and his back line also earned a clean sheet, his third of the season and the team’s fourth.

“I can’t lie, I was getting pretty anxious there in the second half,” said head coach Pete Klepek. “We had so many looks that weren’t going in,but the important thing is that we kept working and eventually we found the goals we needed. Our defense was so solid and we kept generating chances to score, which is a good recipe for success going forward.”

The JV Shoremen also came away victorious this evening in a game shortened by a thunder delay, earning a win over a solid Lakewood JV team 2-1 off goals by sophomore Logan Allemeier and Zach Ramsey. They move to 4-1-1 on the season.

Both squads are back in action on Saturday at home against Normandy, games at 5 and 7pm.