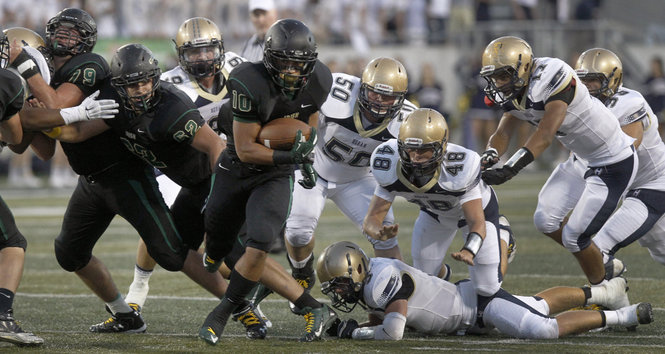 One of the best Northeast Ohio high school football rivalries gets a playoff rematch on Saturday, Nov. 12 at InfoCision Stadium, home of the Akron Zips, when Akron Archbishop Hoban takes on Akron St. Vincent-St. Mary.

Since that loss, St. Vincent-St. Mary (7-4) has won five of their last six games, including a 42-7 blowout playoff win on the road at Dover.

The Irish played a tough regular season schedule, facing four teams that qualified for the OHSAA Playoffs. That list includes losses to Hoban, Cardinal Mooney, and Massillon Washington, but they also handed Steubenville its only loss of the season.

St. Vincent-St. Mary was battle-tested in the regular season and it appears that schedule prepared them for the postseason.

Although Hoban cruised through the North Coast League Blue Division, going 5-0 and winning every game handily, their non-conference schedule was rigorous, as well.

The convincing shutout win at STVM is one of the highlights of the season, but the Knights also crushed Canton McKinley, a Division I playoff team, 42-14 on the road in Week 1.

The only blemish on Hoban’s resume, if one can even call it a blemish, is a 10-7 loss to St. Edward – one of the best teams in the state every year.

Hoban is fresh off of a 37-0 win over Howland in the first round of the playoffs and is riding a nine-game win-streak.

All ten of the Knights’ wins came by a margin of at least 20 points.

The #2 seed Knights and the #6 seed Irish appear to be shaping up for a classic battle.

Rivalry games are always entertaining and you never know what can happen with two teams fired up and the fan bases equally rowdy.

Playing at a neutral site, under the bright lights of a state-of-the-art NCAA stadium will only make that atmosphere even more electric.

And to top it all off, it’s the playoffs – the Division III Region 9 Semi-final.

Both defenses have been excellent throughout the season. Hoban has yet to allow more than 21 points in a game. The Knights shut out their opponents in five of 11 games.

That combination of stout defenses going up against explosive running backs should make for an epic showdown.

The two teams have faced each other head-to-head 41 times.

The Irish lead in the rivalry 21-20, but Hoban has won the last three meetings.

The last time STVM defeated Hoban was in 2014, in a game that went to triple overtime, and the Irish won 33-27.

Hoban has come a long way in five short years, as the Knights went 2-8 in 2012, but won the Division III State Championship in 2015, going 14-1 on the season. Talk about a turnaround.

Last year, the two teams met in the Division III Region 9 final, the third round of the playoffs, and Hoban won 24-21. The game was also played at InfoCision Stadium in front of 12,000 fans.

It goes without saying that STVM will have revenge on its mind for that meeting, but also for the way the tide of the rivalry has started to change over the last three years.

The first week of the 2016 OHSAA Playoffs demonstrated that clear as day last weekend, particularly in the western suburbs of Cleveland.

The two teams met in early September and Avon crushed the Shoremen 31-7.

The playoff rematch ended in thrilling fashion, on an interception in the end zone, which stunned the Avon faithful on their home turf. Eagles fans expected nothing less than a State Championship-berth.

It just goes to show that the old adage often turns out to be true and you never know what to expect in a rivalry game.

All I can say about Hoban vs. STVM on Saturday night is expect a great game, nothing short of the other 41 episodes of the classic rivalry.