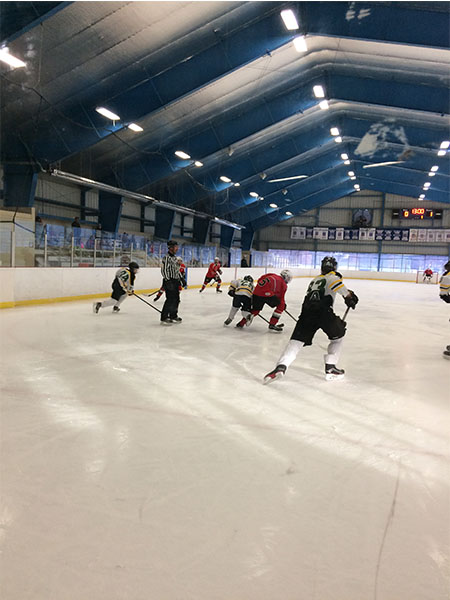 The Redmen scored in the opening minutes of the first period on a goal by Tommy Arthur, assisted by Joey Gallo giving them a 1-0 lead. Amherst wasn’t able to get a shot on goal until the 9:12 mark of the period.

The play on both sided was pretty clean in the period, however, Parma committed a penalty at the 3:18 mark, but the Comets were unable to do anything with the man advantage.

Parma outshot Amherst 9-3 in the period, and they have the lead going into the second period 1-0.

Parma’s Joey Gallo committed a penalty on Alex Dodrill at the 13:54 mark in the second period, causing them to be a man down for a third of the period. Alex Dodrill left the game with an undisclosed injury.

Despite being a man down, Parma’s defense held up, Amherst couldn’t score the equalizing goal.

After Gallo’s five-minute penalty, he came out of the penalty box and scored Parma’s second goal of the game at the 6:14 mark in the period; assisted by Tommy Arthur.

Giving the Redmen a 2-0 lead, heading into the third period; in the second period Parma outshot Amherst 14-8.

Alex Dodrill returned to the game in the third period for the Comets, he committed a penalty at the 12:45 mark. Amherst was able to tie the score at 2 in the period; Amherst scored their first goal by Jacob Kramer, assisted by Jaret Mead and Tyler Waldecki at the 10:16 mark in the period.

Matt Higginbotham scored for Parma; David Basic assisted him on the play, and the third period ended, tied 3-3. They were headed to overtime. Amherst outshot Parma 10-9 in the period.

Parma’s Matt Higginbotham scored the game-winning goal at the 2:05 mark in overtime; Robbie Gudin assisted him on the play. In overtime Parma outshot Amherst 4-2. Parma improves to 3-2-0 and Amherst falls to 1-3-0 on the season.

Even though Parma jumped out to a 2-0 lead, Amherst came back and was able to force overtime, but Parma held on for the 4-3-overtime victory. Amherst’s goalie, Zac Boesel made 30 saves, and Parma’s goalie, Ryan Pinson made 20 saves.