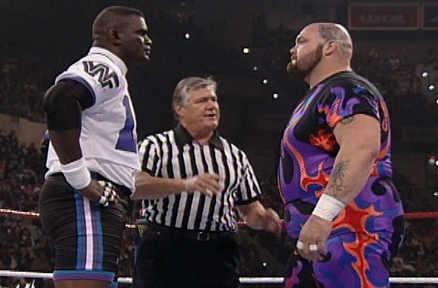 32. Lawrence Taylor vs. Bam Bam Bigelow at WrestleMania 11– It’s hard to sell a main event with a football player in it, especially at the biggest show of the year. LT and Bigelow put on a very forgettable match that should have been on the mid-card. It didn’t help that Diesel and Shawn Michaels had an excellent match right before.

31. Bret Hart vs. Yokozuna at WrestleMania 9– This match didn’t have any breath-taking maneuvers or shocking twists and turns. The credibility of this match surely doesn’t help that Yokozuna won off of a dirty tactic by Mr. Fuji, just to lose the title to Hulk Hogan a few minutes later.

30. Hulk Hogan vs. Sid Justice at WrestleMania 8– Not many Hulk Hogan matches disappointed fans, especially at The Showcase of The Immortals. This match was one of the few exceptions, due to the fact that Justice couldn’t keep the intensity going with The Hulkster throughout the match. This match was not deserving of the main event, as Ric Flair and “Macho Man” Randy Savage had a fantastic match for the WWF World Heavyweight Title in the co-main event and “Rowdy” Roddy Piper and Bret Hart battled for the Intercontinental Title.

29. Undertaker vs. Sycho Sid at WrestleMania 13– Sid Justice was put in two main events of WrestleMania, one against Hulk Hogan and then this one against The Undertaker. He never seemed to be able to live up to the main-event hype, as this match was pretty sluggish.