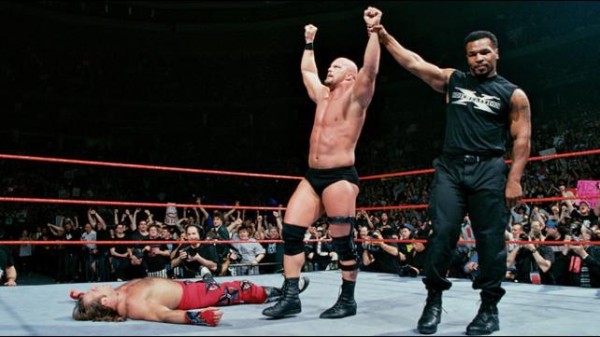 2. Shawn Michaels vs. Stone Cold Steve Austin at WrestleMania 14– This match is one of the main matches that started “The Attitude Era”. Michaels was that cocky champion who had the backup in the form of D-Generation-X. Stone Cold was that guy who didn’t care who you were or where you came from, he was going to beat you up. The factor of having “Iron” Mike Tyson as the Special Enforcer really made things interesting, especially when he seemed to have sided with DX. The match itself was intense. There never was a break in the action, which kept fans intrigued the whole time. The craziness that ensued at the end of the match is what really sparked “The Attitude Era”, as Austin hit HBK with a stunner and Tyson got into the ring to call the three-count for Austin. All of the emotion and unpredictable moments in this match truly set the tone for the following years.