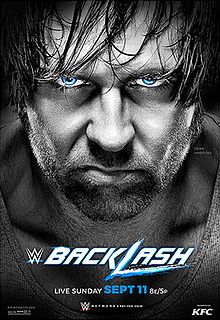 Sunday night was the first of many Pay-Per-Views to come in the near future in WWE. To start off the NEW PPV schedule , the WWE started off with Backlash for SmackDown Live. Here are reactions from Twitter that happened throughout the card.

The Smackdown women impressed me last night. Really loved that match to open the show! #WWEBacklash

What. A. Match. #WomensTitle. So proud of @CarmellaWWE. Came up short tonight, but definitely a future Women's Champion! #WWEBacklash

The Usos beat the Hype Bros which lead to The Usos vs Heath Slater and Rhyno for the Smackdown Tag Team Titles:

The Miz vs Dolph Ziggler for the Intercontinental Championship :

That was the best singles match I’ve ever seen Miz in. Dude is on fire as of late. #WWEBacklash

This is how you make the intercontinental title mean more. Intensity. Great matches. Storytelling. #WWEBacklash

Dean Ambrose vs AJ Styles for the WWE World Championship :
Regarding the fact that Ryback said that he was supposed to squash Styles at WrestleMania 32

With the way AJ Styles has been booked since being with WWE, I think it's safe to say that Ryback is a liar. #WWEWorldChampionship

I have known @AJStylesOrg for almost 15years. Nobody more deserving . #WWEBacklash

Is it safe to say the Ambrose experiment officially failed?; well over half the crowd were chanting AJ over Ambrose. #WWEBacklash

Other Results:
Bray Wyatt defeated Randy Orton due to forfeit. Bray attacked Orton earlier in the night, Orton could not compete.
After Wyatt got the victory via forfeit over Orton, it was announced he would face the next opponent in a No Holds Barred match, his opponent was Kane. Kane ended up defeating Bray Wyatt after Orton came out to the ring and gave Wyatt an RKO, Kane hit a chokeslam to get the pin and the victory.

Let us know what you think of the SmackDown PPV . Tweet @NEOSportsinside or tweet at me personally @PaytonVince .