The Most Underrated Match in WrestleMania History 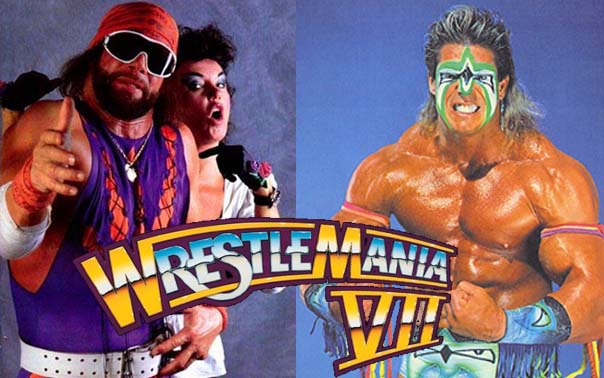 The Retirement Match at Wrestlemania 7 between The Ultimate Warrior vs Macho King Randy Savage stands the test of time as one of the greatest matches of all time, that rarely gets mentioned.

Perhaps this is because both Savage and The Warrior were on the out’s with the WWE for so long, or because it was during a time when almost everything was based on Hulk Hogan.

However, no matter the argument, this is, in my book at least, the most underrated match in Wrestlemania History and worthy of a Top 10 spot all time. I  place it right up there with the greatest matches in Wrestlemania history.

These two men, Savage and Warrior put on a showcase for the immortals that will forever stand the test of time. It was a dramatic storyline that was worthy of Hollywood.  Ironically enough, that year’s Mania was in Los Angeles.

The only sad part of the affair however, is that all 4 key players in the match, have since passed away. Let’s take a deeper look.

At the 1991 WWF Royal Rumble, following a failed seduction attempt by Queen Sherri to convince The Ultimate Warrior to give The Macho Man a title shot, Savage interfered in the title match Warrior had with Sgt. Slaughter, costing The Warrior the belt.

It was billed as a retirement match, with the loser being forced to end his career. The match was every bit as good as the buildup as both men tore down the house with a array of moves, each one more dramatic than the last.  The climax came when Savage became the first person to ever kick out of the Gorilla Press Slam and Splash from the Warrior.  A combo of moves that put away the Immortal Hulk Hogan just a year earlier.   This caused Warrior to go into shock, and question if he wanted to continue the match.  He began talking with his hands and calling upon the God’s for an answer.

He received an answer in the form of a Macho King sized beat down, which led to five consecutive elbow drops from the top rope. When Savage finally went for the pin after that onslaught, it didn’t matter, as Warrior shockingly kicked out.

The ending came soon after, with a Warrior rally and pin to send Savage into retirement. One key thing I want to point out, Savage was truly unselfish in this as he allowed the Warrior (Jim Hellwig) to not only survive 5 of his Elbow Drops, but also pin Savage using only his boot  on the chest.

The drama wasn’t over yet, not by a long shot! After the Warrior exited the ring, Queen Sherri entered it, but not to console her man, far from it!  Sherri began to verbally then physically assault the downed Savage as she quickly realized her meal ticket was gone.  This went on for about a minute before Ms. Elizabeth, who just happened to be in the crowd, leapt over the barricade at ringside and rushed the ring to save Savage.

This led to one of the most emotional re-unions in Pro Wrestling and also Television History as Savage and Liz embraced in a hug. Women and some random little kid, were actually crying at ringside from the emotion.

Sadly, WWF let the wrong guy win, as Warrior was fired only months later and Savage was actually brought back for a world title run at the following years Wrestlemania.

As mentioned prior, all 4 would appear with WCW before their careers ended, and all four have since passed away. With the exception of Ms. Elizabeth, they are also in the WWE Hall of Fame.

While this match may not get the hype of Andre vs Hulk Hogan or Savage vs Steamboat, it was every bit as good if not better!