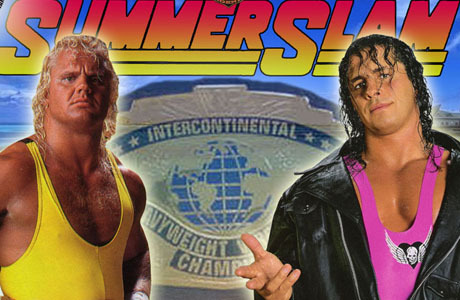 The 31rst edition of WWE Summerslam is tonight from the Barclays Center in Brooklyn.  For many years this has been widely regarded as the WWE’s second biggest show of the year.  Over the years there has been shocking twists and turns, and more often than not Summerslam tends to deliver better thrills then WrestleMania when it comes to the bell to bell action and suspense.  This year looks to be no different.

Despite the stacked card, of 13 announced bouts, 9 title matches and the long awaited in ring showdown between The Miz and Daniel Bryan, this card will have an epic challenge on it’s hands to move into the Top Five Summerslams of All time.  Let’s see what exactly it is up against.

This was perhaps some of the greatest talent of the Ruthless Aggression Era, mixed with the Attitude Era in WWE history.  This was fresh off of the initial Brand Split and everything was still pretty new.  The card was loaded and absolutely delivered.

The main event featured The Rock defending the Undisputed championship against red hot rookie Brock Lesnar.  This was supposed to be seen as the passing of the torch as Lesnar defeated The Rock cleanly and with little doubt to close the show.

The show was kicked off with a mat classic between two legends Kurt Angle and Rey Mysterio Jr.  Speaking of legends, the next match had them to as Chris Jericho took on Ric Flair.  Up next it was two more Hall of Famers as Edge did battle with the returning Eddie Guerrero.  This was during a stretch of Eddie doing some of his best work.

Later in the night, RVD and Chris Benoît practically stole the show with a 16 minute showcase of pure wrestling talent.  This match also presented the first Smackdown vs RAW challenge for the Intercontinental championship.  This would begin the tradition of the IC belt being on RAW, and United States Championship on Smackdown.  A philosophy the WWE has stuck to for quite some time.

This card is most memorable for Shawn Michaels first match back in nearly five years as he took on former best friend HHH in a no holds barred match.  This was supposed to be a one time only for Michaels, but after an epic performance, it led to another 8 years in the ring for HBK including a run with the World Championship.