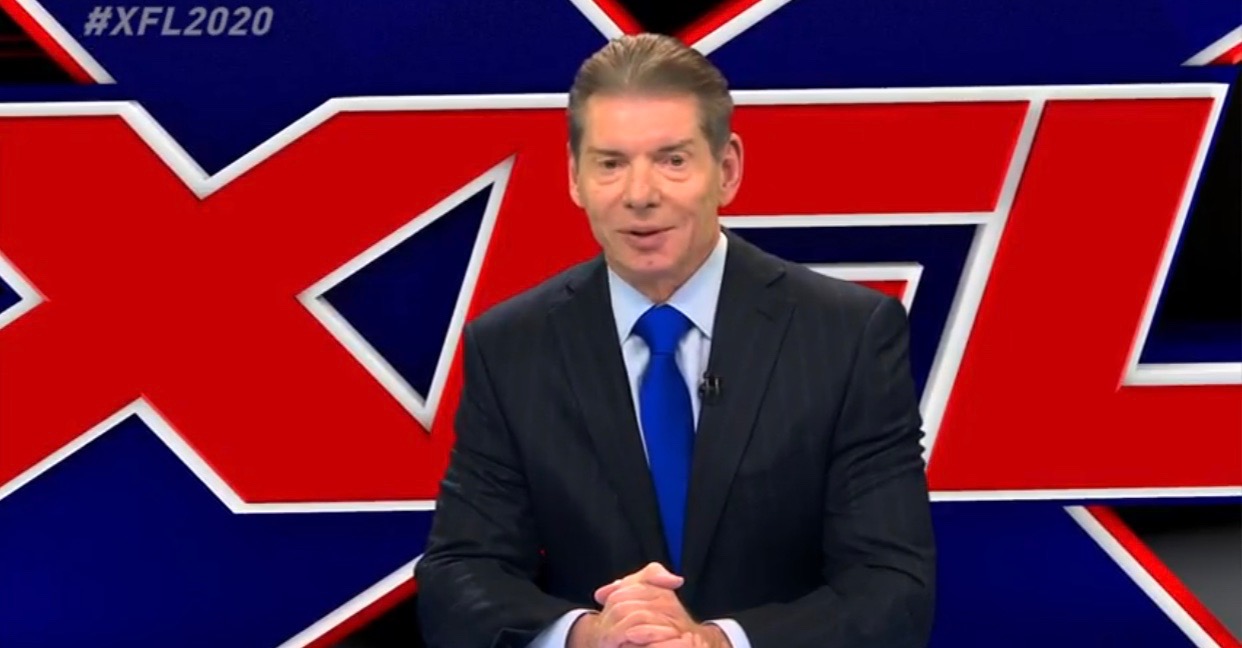 Thursday was a unique day in the sporting world, as WWE CEO Vince McMahon announced that he would revive his football league, the XFL. The football league had not been in existence since 2001 when it folded after its inaugural season. In an unexpected press conference today, McMahon decided to bring it back and give it another go in the professional football setting.

Most shrugged their shoulders or rolled their eyes upon first hearing reports about the return of the gimmick-filled league that was graced by such illustrious names such as Tommy Maddox and Rod Smart, also known by the moniker “He Hate Me” that ran across the back of Smart’s back. After being presented a miserable quality of play along with embarrassing antics by McMahon that saw him objectify women as sexual figures, it’s not hard to wonder why many fans of football or professional wrestling were ecstatic to hear the news of the XFL revival.

During the press conference, McMahon was very calm and poised. He was not exuberant or too much to take in at once. He delivered a smooth and simple message: The XFL will re-imagine football.

Now what that means is anybody’s guess. Trying to imagine how to redesign football without making it hokey is a challenging task in itself, let alone actually fulfilling that task. So how can one do that?

McMahon was drilled with questions from reporters all over that were anxious to find out how exactly football would be “re-imagined” in McMahon’s eyes. Here’s what we gathered from the conference call in the points below:

Those ten points sum up how McMahon is envisioning some of the makings of the reborn XFL, at least in the early stages. I don’t know about you, but it doesn’t seem like the worst mold to start with.

It’s quite obvious what McMahon’s plan is. With the current climate of the NFL turning a lot of people away, McMahon is hoping that a patriotic form of football will attract the fans the NFL lost this season. McMahon’s thought is that if he brings a game of football that has guys with no blemishes on their criminal record and shows the utmost form of patriotism, he can win over the side of the country that Roger Goodell and the shield have lost. It makes a lot of sense and could work. But only if done correctly, which is still yet to be seen.

The good news you’ll see in the above points is that McMahon will stay away from playing a character on-screen and will delegate the duties of running the league to football to football experts that he will appoint. The identity of these football experts is unknown at this point but one thing’s for certain, they will know more about running the game of football more than Vince.

And that’s what leads me to believe that the XFL will not fail this time around. In fact, there’s a possibility that the XFL could eventually rival the NFL. Just not right out of the gate.

It will take some time to get into the real heat of competition with Goodell and the NFL, as the XFL will have to start once again from the ground up. They will need new players, coaches, general managers, the whole nine yards. Heck, they don’t even have their cities lined up and that’s one of the essentials of building a league. But because they didn’t jump head-first into it the restart and will have two years to build a foundation, all signs point to a more prepared and efficient presentation.

Fans of football should want the XFL to succeed. Why, you ask? It’s an alternative to the norm. While the NFL has been running the ship for countless years, it has no competition or power struggle. If the XFL puts the heat on them it could force them to step their game up and look for new ways to make their product the more appealing and entertaining format.

Obviously, when the year 2020 hits, the shield will have the obvious advantage over the new league. They’ll have the face of the league, favorite teams, and fresh new talent coming out of the NFL Draft. If the XFL sticks to the course, maybe it won’t be long until we hear of collegiate players declaring to go pro to the XFL. That idea sounds far-fetched right now, but maybe not down the line.

The best example I can use to explain why you should want this rebranded XFL to work is actually another battle McMahon was in. Think back to the 90’s when McMahon and the WWF at the time battled with Ted Turner and WCW. Both companies pushed each other to the limit and both shows prospered as a result. At the end of the Monday Night Wars, the WCW and Turner were bought out by the WWF and McMahon. That might not happen here but the one-upmanship the two leagues could get into would elevate the game of football we all love.

I do think the XFL will work this time. I have faith that Vince McMahon has learned from his wrongs and will put faith in the people around him to produce a better product. And if he does, he will have once again conquered another world.

Report: Ronda Rousey Says She Will Not Appear In Royal Rumble Sunday, Hasn’t Signed Contract Yet
Five Times The WWE Got The Winner Of The Royal Rumble Wrong