Sato Wins Indy, No. 3 Back In Victory Lane, Moran Gets First Win; Motorsports News and Notes 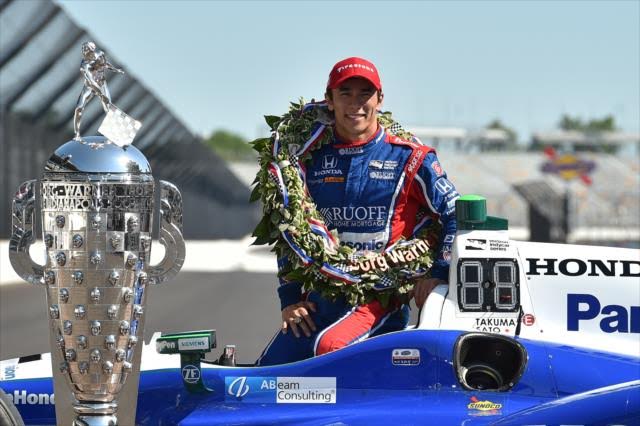 He was so close in 2012. Takuma Sato got it done in 2017, winning the 101st running of the Indianapolis 500. Sato spun while racing Dario Franchitti for the lead on the final lap in 2012. Sato took the lead from Helio Castroneves on lap 195 this year and didn’t look back. A 3-time winner of the Indianapolis 500, Castroneves had to settle for 2nd, his third runner-up finish at The Brickyard.

No. 3 Back In Victory Lane

Austin Dillon scored his first career Monster Energy NASCAR Cup Series win and put the famed No.3 back into Victory Lane Sunday night at Charlotte Motor Speedway. Dillon, the grandson of team owner Richard Childress had just enough fuel to get to the checkered flag first. The No.3 had not been to Victory Lane since the late Dale Earnhardt captured the checkered flag at Talladega in October of 2000. Following Earnhardt’s death at Daytona in 2001, Childress retired the number. That number returned when Dillon began to run in the Cup Series full time in 2014.

Big Weekend For Moran With Outlaws

Ohio native Devin Moran scored his first career win with the World of Outlaws Craftsman Late Model Series Friday night at Atomic Speedway. Devin who is the son of “Million Dollar Man” Donnie Moran, led all 50 laps in the feature, set quick time in qualifying and won his heat race.

One night later at Wayne County Speedway Moran charged from 19th to finish runner-up in the feature. This after he had to race his way into the show due to a mechanical problem in his heat race. Brandon Sheppard won the 50 lap main event.  Chris Madden set fast time in qualifying with a 16.580, a new track record at Wayne County Speedway.

Reed Wins With All Stars

Byron Reed won his heat and then came from the 5th starting spot to win Friday night’s Arctic Cat All Star Circuit of Champions feature event at Attica Raceway Park. The win for Reed was his 11th with the All Stars and first since 2013. Sundays show at Mansfield Motor Speedway was postponed before the main event could be run due to severe weather. A rain date for the program is expected to be announced this week.

Rusty Schlenk and Casey Noonan won this weekend with the Sunoco American Late Model Series. Schlenk took the checkered flag at Oakshade Raceway Saturday night and came withing inches of making it a sweep at the Johnny Appleseed Classic Sunday night at Eldora. Track officials had to use video replay to confirm Noonan beat Schlenk to the checkered flag.

Next months week-long event will now finish with a pair of shows at Atomic Speedway. After Brushcreek Motorsports Complex dropped their date, Atomic picked it up. The Waverly, Ohio track will now pay $3,000 to win on Friday night July 28th and turn around and pay $5,000 to win on Saturday, July 29th. The 3rd annual Buckeye Late Model Dirt Week will get started on Thursday, July 20th at Hilltop Speedway in Millersburg.