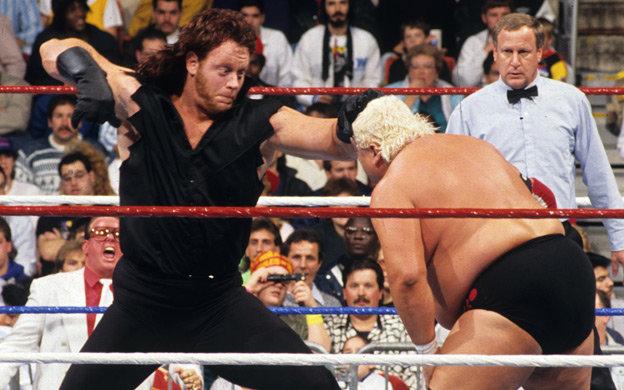 1988 – Mr. Fuji turns on Demolition to manage The Powers of Pain in one of the original “double turns” of pro wrestling.

1989 – A locker room attack sets up the Epic “ No Hold Barred Match” between Zeus & Macho Man versus Hulk Hogan & Brutus The Barber Beefcake.

1990 – The Undertaker debuted as a member of The Million Dollar Team.

1993 – Owen Hart shows the first sign of dissension in the vaunted Hart family.

1994 – Bret Hart was swerved by brother Owen, dropping the title to Bob Backlund.

1995 – Bret Hart wins the title back, causing then champ Diesel to turn heel immediately after the loss.

1996 – Who will ever forget the dramatic return of Bret Hart as he took on the young and upcoming Stone Cold Steve Austin?  Also on the card, Pschyo Sid took the belt off of “friend” Shawn Michaels after causing his mentor Jose Lothario to have a heart attack at ringside.  Not to mention the debut of a young superstar who would go on to be known as “The Rock”.

1998 – The Rock wins a tournament for the vacant WWF championship, joining the “evil” Corporation in the process.

1999 – Stone Cold Steve Austin gets run over by a car, driven by Rikishi and planned by HHH.

2001 – The greatest Survivor Series of all time as WCW battles WWF for a winner take all!

2002 – The first Elimination Chamber Match see’s Shawn Michaels win the World Championship after sitting on the sidelines for nearly five years with a back injury.

2005 – Booker T and Chris Benoit engage in a classic that will now be ignored by the WWE forever.

2007 – A returning Edge ruins the Batista versus Undertaker Main event

2010 – Pure drama unfolds as Cena gets fired by not helping Wade Barrett in his match with Randy Orton.  The real story unfolds the following night as The Miz cashes in the MITB for the championship.

2013 – A largely forgettable event, that did see CM Punk tag with Daniel Bryan, but little else of note.

2015 – An open tournament for the WWE Title see’s Romans Reigns finally grab the gold, only to lose it moments later when Sheamus cashes in his MITB.

2016 – The Team Smackdown vs Team Raw match goes nearly an hour, and then Goldberg defeats Brock Lesnar in less then two minutes in a night perfectly booked!

ISC Trio Called Up to U.S. U-20 WNT for Training Camp in Sunrise, Florida
After slew of point guard injuries, Jose Calderon gets starting nod