Why “Pro Wrestler” John Cena, May Be Your Child’s Last Chance At A Sports Hero! 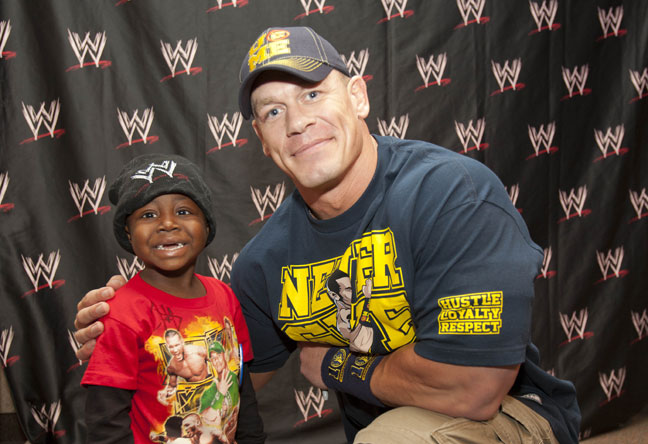 Here below are just a few off the top off my head that had the chance to be known as the greatest in their sport, but their legacies will forever be tainted from actions elsewhere.  I even added a few that were young up and comers until they got derailed as well with stupid decisions.

After this list, you will find a man who truly is a hero, and a video that shows the true heart of the man and role model that is John Cena.

Tiger Woods – Cheated on his wife with countless women and had a recent DUI to further tarnish his legacy.

Dan Marino – Had two families.  Two Wives at the same time that knew nothing of the other one.

Pete Rose – Gambled on the game while playing and managing

Jon Jones – A little bit of everything – Steroids, drug abuse, hit and run, and just a handful of other issues.

Mike Tyson – Sent to prison for Rape. (The first time) Tyson would later return to prison on other charges.

Magic Johnson – Contracting HIV in the peak of his career by cheating on his wife.

Kobe Bryant – Accused of rape from an extra marital affair.

Josh Gordon – Can’t get back in the NFL because he cannot stop smoking pot.

Albert Belle – Corked his bat, chased down children on Halloween in his car etc….

Manny Ramirez – Left Cleveland for more money and then was popped for Steroids as well.

Kyrie Irving – Asked to leave town because he couldn’t get along with LeBron.

Bill Belichick – Accused of setting up camera’s to spy on opposing teams.

That is 25 men off the top of my head who have easily done things to tarnish their careers that were once revered.  I could add players such as Johnny Manziel, but I thought it was important that they would have reached a level of success on the pro level, in which he never did.  I threw Josh Gordon into the mix because he will go down as a huge “what if”.

So, with all of that said, where do your children now turn to for their sports hero?  Very simply, the answer is a man that many adult men have the audacity to boo.  That man’s name is John Cena.  He may be thought of less in the mainstream media because of his career in Pro Wrestling, but there is no taking away from this great man.

Cena has granted over 500 Make A Wishes’.  A record that will never be touched.  He is genuinely a nice man with truly good intentions to positively effect today’s youth in and out of the ring.  Pro wrestling may be scripted, but I assure you, nothing about this man is fake.

His message of “Never Give Up”, has inspired many around the world including myself.  It has helped people fight cancer, battle depression, believe in themselves, lose weight and countless other positive ways.

Need proof that he is more than just talk?  Simply watch the video below and you judge for yourself!