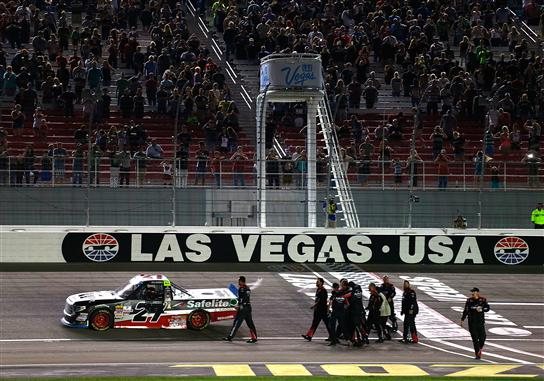 NASCAR Playoffs Down To 12

The playoff field in the Monster Energy NASCAR Cup Series has shrunk from 16 to 12 following Sunday’s race at Dover International Speedway. Kyle Busch won the race and trails Martin Truex Jr. by 18 points in the standings.

Kasey Kahne, Ryan Newman, Kurt Busch and Austin Dillon were eliminated. The round of 12 starts this weekend in Charlotte where all point totals will be reset to 3,000 where the remaining 12 drivers will have their playoff points added.

Sandusky based ThorSport Racing earned a win in the NASCAR Camping World Truck Series Saturday night when Ben Rhodes held off Christopher Bell in the closing laps at Las Vegas Motor Speedway to earn his first career win. The win locks Rhodes into the second round of 6 in the NCWTS Playoffs. It was a solid night for ThorSport racing as the entire team finished inside the top 10. Cody Coughlin finished 6th, Matt Crafton finished 7th and Grant Enfinger came home 9th. The NCWTS visits Talladega Superspeedway on Saturday, October 14th.

Tyler Carpenter earned two big wins over the weekend. After being rained out two times earlier this year, Midway Speedway ran the Jim Dunn Memorial on Saturday. Tyler Carpenter picked up the win taking home the $12,000 payday. A night later Carpenter would drive to victory at Skyline Speedway in feature event.

Danny Smith captured the point’s title in the Ohio Sprint Car Series for the year. Smith finished 7th in the season finale at Atomic Speedway, while Cole Duncan took the checkered flag and earned the victory and took home $4,000.

The Arctic Cat All Star Circuit of Champions will make 3 more stops in Ohio before the end of their 2017 season. The series, owned by former NASCAR champion Tony Stewart will visit Wayne County Speedway this Saturday. The All Stars will then visit Mansfield on October 13th before wrapping up the season at Eldora on October 14th. Current NASCAR Camping World Truck Series point’s leader Christopher Bell is scheduled to be at Wayne County Speedway this weekend.