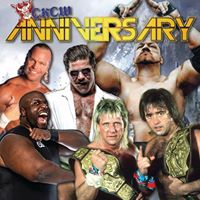 *****It was announced that Eric Bischoff would be appearing at the next live C.K.C.W. event on Friday, February 9, 2018 as the new co-owner of Cleveland Knights Championship Wrestling!!!*****

(9) STEEL CAGE MATCH TO CROWN THE FIRST EVER C.K.C.W. WORLD’S TAG-TEAM CHAMPIONS: “The Heavy Artillery” (Thunder & Lightning) defeated “Stateline” (Damien Angel/Eddie Taurus) (Lightning pinned Taurus after his partner had elevated him for his “Ace Crusher”) in 7:20 for the title!!! All four participants were bloodied in this cage battle!!!

Again, a HUGE thank you to Hank Hudson!