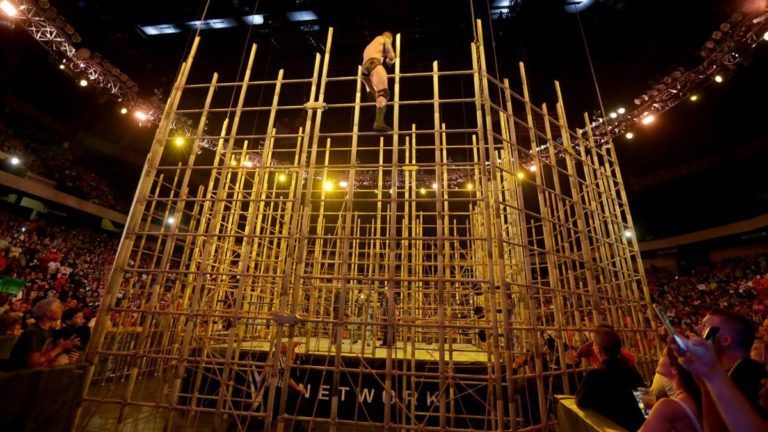 It was a thrilling main event that saw Randy Orton come within seconds of regaining the WWE World Heavyweight Championship when a returning Great Khali spoiled his night.  Khali came out at the end of the match and started choking Orton through the cage long enough to  allow Jinder Mahal to exit the “Punjabi Prison” and retain his gold.

Randy Orton already had his hands full in his match with current champion Jinder Mahal when the former champion, Khali, arrived and prevented Orton from escaping the Punjabi prison.  Orton had already brutally disposed of both Singh Brothers throughout the match as they both ran plenty of interference on behalf of Mahal.

One brother was tossed 15 feet off the outside cage through the announce table in the most organic, original and legitimate fall since Mick Foley did it 20 years ago.  The bump looked great and stole the show.  The other Singh brother was devastated from brutal Orton chair shots.

It appeared that Orton, who fought a great match and took a beating himself doing it, was only seconds away from victory.  Orton had been hampered by a bum left elbow all night, but wasn’t about to let anything stop him from retaining the gold.  Sadly for The Viper, he wasn’t counting on the 7 foot 7 inch monster to return out of nowhere.

Orton who has been described as lazy in several of his last main stream feuds, seemed determined to shake the label tonight in this infamous match.  Knowing he had a challenge to do so, he still went all out and put on a great show for the fans.

The path now seems clear for a Cena vs Jinder Mahal main event at SummerSlam.  Smackdown Live did a good job tonight opening the doors on several potential feuds.  With the Cena win over Rusev in the flag match, that will allow Cena to now challenge for the title as Orton will switch gears to a brief feud with The Great Khali.

Speaking of the “Punjabi Playboy”, his former main squeeze Natayla also scored a big upset win tonight.  She took home the shocking win in the 5 way Women’s match to name the number one contender for Naomi’s WWE Smackdown Live Women’s championship.  Still nothing for either Becky Lynch or Charlotte, interesting to say the least.  Also not sure where you go with Lana from here.

Another possible opening was set tonight when Kevin Owens (as predicted earlier) won the United States Championship back from AJ Styles.  Styles will now be pulled into a dramatic and classic feud with Shinsuke Nakamura who defeated Baron Corbin.

As for who Owens will defend against?  One can only guess, but a victorious Sami Zayn over Mike Kanelis is always an option.  There is never a bad time for an Owens vs Zayn match / feud.

The New Day had a big win to defeat The Uso’s for the WWE Smackdown Tag Championships.  This feud has been great, and I would expect a ladder match between the two teams at SummerSlam.

The upset of the night went to Aiden English who actually picked up a big singles win when he took on and took down Tye Dillinger.  This was revenge for his loss to (10) at MITB.

Finally, the angle with “Breezeango” just gets more and more bizarre.  Entertaining, but odd.

The Cavs’ Tumultuous Summer Of 2017
Richard Jefferson Speaks Out On The Kyrie Irving Trade Talk, Says Irving Has “Had A Much Tougher Time”