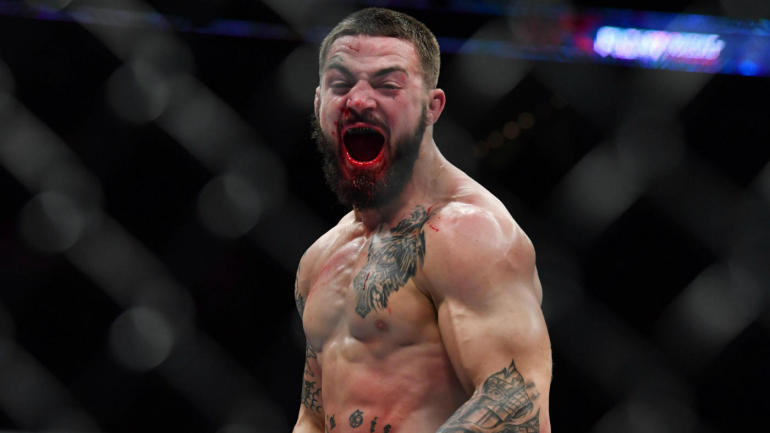 PITTSBURGH, PA – Mike Perry wasted no time in dispensing a game Alex Reyes tonight at PPG Paints Arena in Pittsburgh.  If it stands true, it will be the second fasted knockout of the night at One Minute and Nineteen lighting quick seconds.

Perry was his usual jubilant self after the fight, dancing in the cage while draped in the American Flag.  Beautiful Girlfriend by his side and fans going crazy, it was clear that Perry has that “it” factor.

Call him controversial, call him cocky, it simply doesn’t matter as he moves the needle and keeps fans talking about him.  At 11-1, his record speaks for himself, with his only loss coming against Alan Jouban in a highly disputed decision. All 11 of his wins have come by knockout, most of which in the first round.

Perry wasted little time grabbing the microphone in his post-fight speech and calling out former UFC Welterweight Champion Robbie Lawler.  While it would be a fight that Perry would be the underdog in, it would also be a career altering victory if he grabs it.

Platinum Mike Perry went on to say this after the big victory, “I was that confident in my ability (that I didn’t need to study much film on Alex Reyes). I like to do things off the top of my head, I’m quite the procrastinator.

I just like to do things spur of the moment. I didn’t really know much about Alex (Reyes) going in, but I can’t say nothing because my coaches studied him a little bit. My coach, Julian Williams, was worried about when he gets north south or the front headlock or he ended up grappling. We drilled a few moves to use if he got a takedown.

One thing is clear, no matter who the opponent is if he gets on that UFC 219 card in Detroit, fans will pay to see him, and whomever he fights better pack a rock hard jaw and his work boots, because it will be a long night!