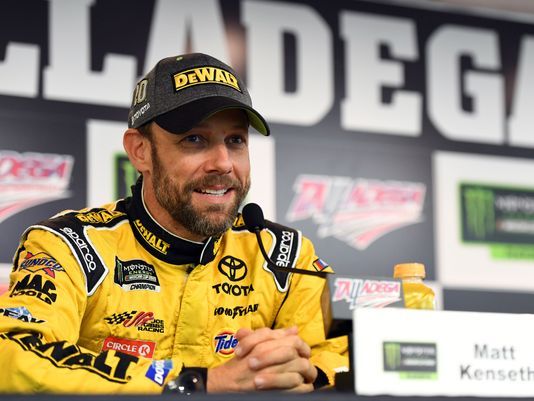 If this is the end of the line for Kenseth, he is riding off into the sunset in style.

Matt Kenseth took the lead from Chase Elliott with ten laps to go and held on from there to win Sunday’s Can-Am 500 at Phoenix International Raceway.

Ryan Blaney, one of the championship contenders, won the pole for the race and led the field to the green flag.

Denny Hamlin and Chase Elliott, two of the five drivers that were looking to punch a ticket into the Championship 4 race in Miami, battled for the lead early on, but Kyle Larson took the lead before the end of stage one, and would later win. Hamlin would finish second, and Chase Elliott placed third.

Larson came into Sunday’s race looking to snap a funk of three bad finishes and build momentum for 2018, after having been a championship contender for much of the 2017 season. But bad luck continued to plague him, as he suffered another engine failure, this one occurring at lap 105, ending his race early.

Another championship contender would be felled by trouble before the end of stage two. Jimmie Johnson, seven-time MENCS champion and looking to secure an unprecedented eighth title, cut a right front tire with one lap to go, ending his championship hopes. Denny Hamlin won the stage, Matt Kenseth finished second, Erik Jones, Martin Truex Jr., and Kyle Busch rounded out the top five to complete a Joe Gibbs alliance sweep.

Action picked up as the final stage began. At lap 226, Dale Earnhardt Jr., cut a right front tire and had to make a green-flag pit stop. Three laps later, Trevor Bayne smacked the wall hard going into turn four to bring out the third caution. He walked away from the wreck without injury.

Chris Buescher brought out the fifth yellow when he spun and backed into the turn three wall. A small fire broke out one of the SAFER barriers, bringing out the red flag for the fifth time in six races.

After another caution, due to Cole Whitt hitting the wall going into turn four with 52 to go, the race resumed. Chase Elliott made contact with Denny Hamlin in a battle for position, and Hamlin’s right front suffered a puncture, and he hit the wall with 33 to go, ending his championship hopes.

Chase Elliott took the lead from Matt Kenseth, who led for the duration of the final stage, with 28 to go, looking to pick up his first career victory and punch a ticket to the Championship 4 in Miami. But Matt Kenseth ran him down and took the lead with ten to go, and held on from there, winning  what may be his second-to-last career race.

Chase Elliott finished second, failing to advance to the Championship 4. He had six top ten finishes and four second-place finishes during the playoffs.

Martin Truex Jr, who clinched a spot in the Championship 4 last week on points, finished 3rd. He has won seven races this year, with his most recent win coming at Kansas in October.

Erik Jones, current leader in the Rookie of the Year standings and future driver of the 20 car at Joe Gibbs Racing, finished 4th, picking up his fifth top five of the season.

Kevin Harvick, who clinched with a victory at Texas last Sunday, rounded out the top five. Harvick’s only other victory came at Sonoma in June.

Kyle Busch, who clinched his spot in the Championship 4 with a victory at Martinsville in October, finished in seventh. He has five wins on the season. He also won at Pocono, Bristol, New Hampshire, and Dover.

Brad Keselowski, despite having engine problems towards the end of the race, survived the chaos and finished 16th, clinching the final spot in the Championship 4. Keselowski has three wins on the season, his most recent coming at Talladega. He also won at Atlanta and Martinsville earlier in the season.

Ryan Blaney, despite leading early in the race, fell out of the top ten and never recovered, finishing in 17th. Nevertheless, Wood Brothers Racing will finish in the top ten in points for the first time since 1994, when Morgan Shepherd finished in sixth in the final standings. Despite being eliminated, Blaney has a shot to put Wood Brothers Racing in the top five in points for the first time since 1974.

Keselowski (2012), Harvick (2014), and Kyle Busch (2015) are each looking for their second championship. Martin Truex Jr. has won seven races this year and the most stages of the remaining four, is looking for his first and the first for Furniture Row Racing, a small team out of Denver, Colorado.

Jamie McMurray (6th) Snaps a string of four consecutive finishes outside the top ten and his best finish since Charlotte where he finished in fifth.

Aric Almirola (9th) Earlier in the week, it was announced that he would drive the 10 car with sponsor Smithfield for Stewart-Haas Racing in 2018. He picked up his third top-10 and fourth top-15 in the last five races.

Dale Earnhardt Jr. (10th) Made his final start at the track where he picked up his most recent victory in November of 2015. Rallied to finish in the top ten despite cutting a tire at lap 226. He is closing out his career strong, with six of his last seven races finishing the top 12.

Ty Dillon (11th) Ties his career-best finish that he picked up at Talladega in October.