Looking Ahead, Moran Gets Another; Motorsports News and Notes 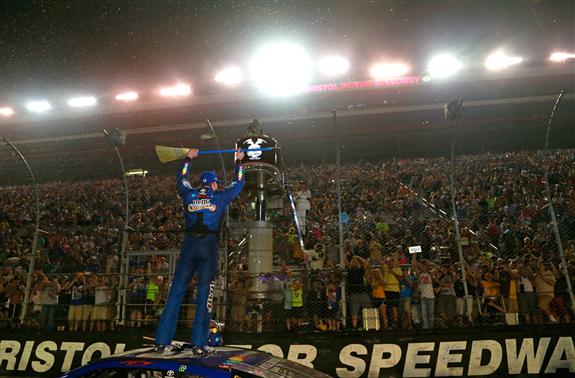 Looking Ahead, Moran Gets Another; Motorsports News and Notes

Kyle Busch couldn’t be beaten over the weekend at Bristol. Literally. Busch drove to victory Wednesday night in the NASCAR Camping World Truck Series race. Friday night Busch captured the checkered flag in the NASCAR XFINITY Series event and then drove to victory Saturday night in Monster Energy NASCAR Cup Series. Saturday night’s win was the 40th of his Cup Series career. Busch is the only driver to complete the trifecta at Bristol and now has done it twice. The first time coming back in 2010.

Though the 2017 season is not yet complete, area tracks are already hard at work scheduling big shows for 2018. The Homak Penn Ohio Stock Car Series announced last week they will hold a $10,000 to win show at Sharon Speedway (Hartford, Ohio) in late June 2018. Though the exact date, rules and complete payout have not yet been announced, the show will follow the format used by the All Star Sprint Series.

Mansfield Motor Speedway has announced plans to host the Sprint Car World Championships next April. The two-day event will be held April 27th and 28th paying $100,000 to win.

Devin Moran (Dresden, Ohio) captured his second career win with The World of Outlaws Craftsman Late Model Series Thursday night in Georgetown, Delaware. Moran started on the pole and led the entire way capturing the $10,000 payday. Thursday’s visit to Georgetown Speedway was the first ever trip for the series.

Midway Speedway has announced that the Jim Dunn Memorial will be run on Saturday, September 30th. The $12,000 to win late model event has already been postponed twice this summer due to weather. It was also announced last week that the Inaugural Mark Luning Memorial will be run the same night. That main event featuring modifieds will pay $1,500 to win.

Hinckley, Ohio native Matt Tifft will run for MDM Motorsports when ARCA visits Road America on August 27th. Tifft using the time to get more experience before he tackles the road course in the NASCAR XFINITY Series that same day. Tifft, who sits 7th in the NXS points, finished 3rd earlier this month on the road course at Mid-Ohio.

Submitted by Brian Deitz of NEOSI