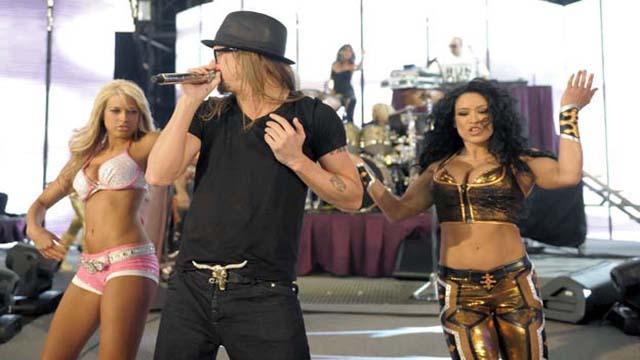 On Monday, World Wrestling Entertainment tweeted out the following announcing that Kid Rock is heading to the WWE Hall of Fame Class of 2018. Kid Rock has performed at WrestleMania 25 and Tribute to the Troops in 2012.

BREAKING NEWS: As first reported by @billboard, @KidRock is the celebrity inductee in the #WWEHOF Class of 2018! https://t.co/5QTD1Pz1v3

These members of the Class of 2018 will receive their WWE Hall of Fame ring and officially be inducted on April 6th in New Orleans.

Triple H took to Twitter to congratulate the latest inductee.

.@KidRock has lent his signature sound to many @WWE events over the years. His support of our Superstars, events and commitment to our troops has been unwavering. For that and more, welcome to the celebrity wing of #WWEHOF. pic.twitter.com/sMwok8jklH

A few other WWE employees made comments about Kid Rock becoming the latest inductee.

Entrance themes for Undertaker and Stacy Keibler; performances at #WrestleMania and @WWE #TributeToTheTroops; and now, induction to the @WWE Hall of Fame Class of 2018. Welcome, Kid Rock! #WWEHOF https://t.co/HWgxBK8Vpm