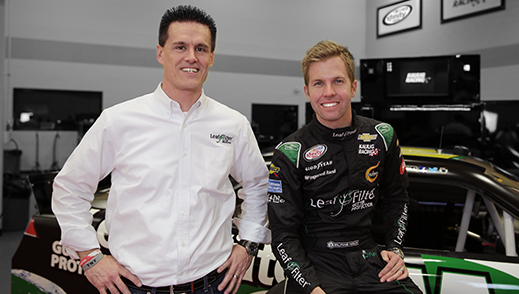 Maybe you’re new to racing and looking for someone to cheer for? Maybe you like to root for the team with ties to the area? If that’s the case, Kaulig Racing and the number 11 LeafFilter Chevy Camaro driven by Blake Koch could be that team.

Originally from Chicago, team owner Matt Kaulig attended the University of Akron where he played football. That’s where Kaulig met his wife, a cheerleader at the University of Akron who was from Copley. In 2005 Kaulig started LeafFilter Gutter Protection from the basement of his home. Since then, things have taken off. From a small office in Hudson to a company that has 33 offices across the country, LeafFilter has received national recognition.

On the racing end, the single car team that carries LeafFilter sponsorship has their sights set on the NASCAR XFINITY Series title. In 2016, their first full season, Kaulig Racing with Koch behind the wheel qualified for the inaugural XFINITY Series chase, finishing seventh overall. A change to the point structure for 2017 has the team again thinking about the series title.

All 33 NXS races will be broken down into three stages. The top-10 finishers in each stage receive additional championship points, with the winner of the first two stages receiving one playoff point. Those points will be added to a drivers reset total provided he makes the playoffs.

“I think we will have a different strategy going into the races now and the goal will be to get as many bonus points as we can to carry over into the playoffs,” said Koch.
A partnership with Richard Childress Racing gives Kaulig Racing top equipment. The technical alliance includes the use of ECR engines.

Koch and the LeafFilter team will get on the track at Daytona International Speedway Friday with a pair of practice sessions. They will qualify Saturday morning with the NXS season opener set for Saturday afternoon at 3:30 p.m. THE NXS returns to Ohio August 11th and 12th for its 5th annual visit to the Mid-Ohio Sports Car Course.