How To Fix The WWE PPV Problem 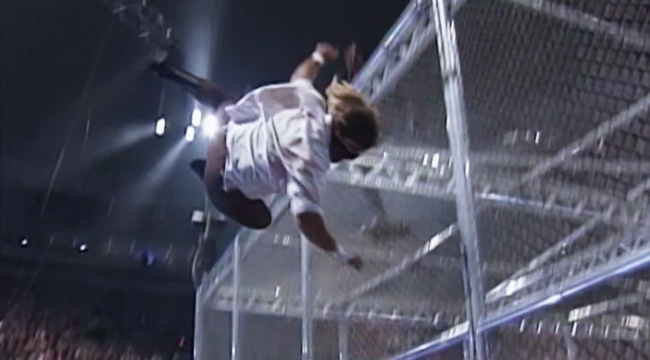 The WWE has come under recent fire for having some “subpar” Pay Per Views. This was bound to happen when the PPV schedule went from 12 a year to nearly 20 after the Brand Split.

In the end, there is no real “fix” to this problem unless the WWE is willing to lose money. The likely hood of that is slim to none.  By taking a step back, and going back to only 1 Pay Per View a month as they did the first time there was a brand split, would do a lot to help both brands and keep things interesting as storylines would have much more time to grow before being forced onto a PPV.

This would mean eliminating a lot of Pay Per Views that seemed forced at times, and not really a WWE staple. Ones such as Battleground, Unforgiven, Judgment Day, Fastlane or Great Balls of Fire can be shown the exit.

Here and now, I give you and the Pro Wrestling World the Ultimate Fix to this problem, with bringing back a little of the old along with it. Enjoy!

This one will be set in stone, as next to WrestleMania it is always the most popular show of the year. Lately, they have butchered it year in and year out, going back to 2012, the winners have been extremely predictable.  However, no one can deny, this is a beloved event by ALL!

A WCW classic which in most cases, kicked off their PPV season each year. A tremendous showing that normally featured a big name main event.  Sting, (who else) would normally dominate this event throughout the early years and even later years.  The WWE would be wise to bring this one back complete with DVD packages.

Ummm, do I need to write anything at all? The one switch to the card should be going back to 4 hours  for everything start to finish, and getting rid of the 7 hour format.

This, for a long time, was the traditional Pay Per View to follow WrestleMania. They need to keep it that way for the immediate future. It was never a card that saw many title changes, but it did a great job in re-affirming the decisions of Mania and more or less wrapping everything up for the summer.

A WCW favorite that disappeared, then came back with a Vengeance! Have it in a Western part of the country. Give it a Cowboy feel, and have fun!  The WWE tried bringing back The Great American Bash once, why not this?

June – King of the Ring

For 10 years, 1993-2002, this was one of them most looked forward to shows of the year. Fans loved it, wrestlers loved it.  It was a fun night that did a lot to advance careers and create countless Magical moments.  Does the Stone Cold Era ring a bell?  How about The King of Hearts?  Or Mankind being thrown 20 feet off the Hell in the Cell?

July – Bash at the Beach

Make this your one outdoor show of the year. Have it at Daytona Beach (ala 1995) and give it some serious attention.  Some of the most famous moments in WCW history occurred here.  The formation of the NWO.  Hulk Hogan walking out of the arena to never return.  Hulk Hogan & Dennis Rodman vs Karl Malone & DDP.  Hot women in Bikini’s on the Beach, yes, this works!

Insert common sense here. The ONLY switch I would make is moving it around each year.  I do not like the fact it is in the same place each year.  Silly! First it was LA for 5 years, now Brooklyn.

I so hoped when the WWE released a “Best of War Games” DVD a few years back, it meant this was coming back. Sorely, it didn’t happen.  Now, with the brand split, the timing is perfect for brand vs brand warfare in a double cage!

Havoc always had a cult following as the second most popular Pay Per View on the WCW schedule over the years.  Between the awesome Halloween Sets each year, and the craziness of the event each and every year, it was hard not to love.  Weather it was Vader vs Cactus Jack in a Spin the Wheel Make the Deal Match, or Goldberg vs DDP for the WCW World Title, it always delivered!  This event was extremely popular and can be again if they allow it.

One of the original big four and the second ever WWE PPV staple created.  While many love SummerSlam and Royal Rumble, few realize that Survivor Series actually came before both of them in the annuals of Pay Per View.  The WWE should stick to the exact same method they used last year and make it purely a Smackdown vs RAW show.  It worked perfectly last year!

It was the WrestleMania of shows for WCW for their entire existence.  Their is no reason to think this one can’t make a comeback.  It would cap off each calendar year and finish off every major storyline out there, allowing the Royal Rumble to be a fresh start on the road to WrestleMania.