Was this the greatest 12 months in American Sports History? 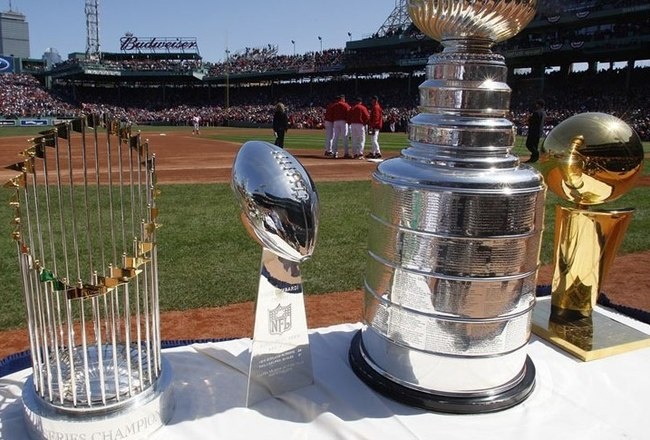 After Sunday nights dramatic Super Bowl finish, one could make a serious case that the last 12 months in American Sports History, are perhaps the greatest and most exciting of all time.

Flash back to February 7,2016 when the Broncos had just gotten done rolling over the Carolina Panthers 24-10 in an anti-climatic Super Bowl. The game underwhelmed and people were talking about other things in the sports world, and well,,,, just other things pretty darn quickly.

The Sports Gods heard the moans of the fans, and unleashed the next 12 months of events that would leave fans breathless and in awe more often then not.

Lets start on the hardwood with the NBA Playoffs – Drama was served up often and in large dosages throughout the NBA Playoffs.  While everyone simply expected the 73 win Golden State Warriors to roll through the West with only having a small challenge from the Spurs.

Not only would the showdown with the Spurs not happen, but the Warriors ended up getting challenges from every other angle after Steph Curry went down to injury in the opening round against the 8th seeded Houston Rockets.

While the Warriors managed to roll through both Houston and Portland in the first two rounds, winning in 5 games each.  They received the challenge of a lifetime as the Oklahoma City Thunder pushed the Warriors to 7 games in a classic series that left the NBA world on the edge of their seats.

Meanwhile after the Cavaliers won 12 of their first 14 games in the playoffs to set up the NBA Finals rematch with Golden State, they struggled against the Warriors again, falling behind 3 games to 1.

Well, here in Northeast Ohio we are all very familiar with what happened next as the Cavs rallied from a 3-1 hole to end a 50 plus year draught winning the NBA Championship!  They did it in dramatic fashion, taking Game 7 down to the wire!

While many don’t remember who won the NHL Finals, (Pitt over SJ in 6 by the way), it was a thrilling AHL Calder Cup Finals that saw the Cleveland Monsters (then Lake Erie Monsters) walk away with the title.

In the NFL after a lackluster regular season and a post season, not many can argue that Tom Brady’s heroic comeback may have been the greatest comeback and greatest Super Bowl in NFL History.

The UFC didn’t miss out on the incredible sports year, putting on massive cards at UFC 200 ( The First Under the New Ownership Team) and then again in November at UFC 205, as they brought MMA to Madison Square Garden for the first time.

“The Masters” widely known as the Super Bowl of Golf had one of the most dramatic finishes in tournament history as it looked like young Phenom Jordan Spieth had it all but locked up on Day Four before an epic collapse.

Danny Willet came back from five shots down at the start of the back nine to win his first major title.  Spieth birdied his final four holes of the front-nine to open up a five-shot advantage. After bogeys at the 10th and 11th, Spieth put two balls in the water on the par-3 12th and made quadruple bogey, dropping him to a tie for fourth. Willet didn’t miss out on the opening as he Willett made par on the last two holes to post a round of 67 and five-under for the tournament.

Perhaps the greatest championship series was the one the World thought we’d never see.

A Chicago Cubs vs Cleveland Indians World Series.  Some thought that the world would end before these two teams met in the Fall Classic.  It almost seemed poetic that it would go 7 games, end in November and go Extra Innings in a Game Seven Nail Biter.

In the WWE, they broke the all time indoor attendance record in Dallas at WrestleMania 32.

An excellent year for sports drama and Cindarella Stories, what will the next 12 months bring?

Only time will tell, but one thing is for sure, no matter the outcome, WE WILL BE WATCHING!