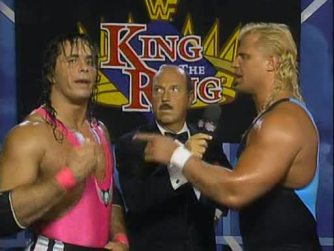 DAYTON, Ohio – For years, the month of June was known as King of the Ring Month in the WWF. It typically set up the Main Event of SummerSlam and would put over a wrestler who was not yet champion, or a former champion set for another run with the title. It was a popular event for many years and it was quite shocking in 2003 when the WWE decided to do away with it as a PPV.

We here at NEO Sports decided to take a look back as part of a 10 part series on the June spectacular.
Today we bring you part one. King of the Ring 1, June 1993 from Dayton Ohio.

Bret Hart won the tournament, defeating Razor Ramon in the first round, Mr. Perfect in the semi’s in a classic bout! He won the crown by beating one of the best big men of all time, Bam Bam Bigelow. Hart was on the cusp of making another run at his title by winning the King of the Ring, but saw his coronation ruined by the evil Jerry The King Lawler who attacked him during the ceremony setting up their feud instead.

Their feud would hit its peak later that Summer at SummerSlam 1993, as Lawler would try to weasel out of their match, only to get trapped in the Sharpshooter for an extended period of time before having to be stretchered out of the arena. It also led into the beginning of the Owen Hart vs Bret rivalry that would be one for the ages.

It was a great rookie offering for the tournament, and one that would feature several Hall of famers in Mr. Perfect, Duggan, Hart and Scott Hall (Ramon). Along with two people who could eventually be Hall of Famers in Luger and Bam Bam Bigelow.

Other news and notes from the show :

Yokozuna ended Hulkamania for 9 plus years in WWF and took his title in the process. In a result no one saw coming, Yoko took the title off of Hogan, and then the Hulkster would not return to WWF for 9 plus years. This was also the debut of Jim Cornette dressed up as a Japanese camera man to take the picture of Hogan with an exploding camera that led to him getting burned, and dropping the belt. It was also no accident that the WWF had Yokozuna kick out of Hogans leg drop right before this occurred.  They sensed his departure was near, and needed for Yokozuna to look strong kicking out of Hogans finisher.

Elsewhere on the card, Crush failed in his attempt to take the IC belt from Shawn Michaels as this was the beginning of Diesel at ringside for HBK. It’s amazing to see the different paths these two men took after this match.  Michaels would go on to become one of the greatest, if not, the greatest Pro Wrestler of all time, while Crush turned Heel and was never again in title contention for any title!

Luger and Tatanka fought in a great 15 minute draw that was quickly forgot about. It was also Hacksaw Jim Duggans last WWF pay per view outing as he lost to Bigelow, and would soon depart for WCW with Hogan.

This card really showed how well Bigelow could perform in a main event as he looked excellent. Also, the Hart vs Perfect match was an instant classic.

Stayed tuned into NEO Sports Insiders, as tomorrow we will post part two of our ten part series on the King of The Ring.

Win 2 Free Tickets To Go See AFC Cleveland Battle For The Cup!
NBA Finals Prediction: Who Holds The Edge And Why?