FLASHBACK: THE WWF 1996 KING OF THE RING 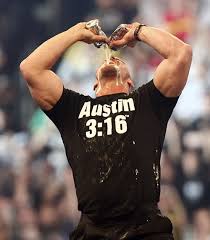 King of the Ring (1996) was the fourth annual King of the Ring and easily one of the best and most memorable from start to finish. The event took place on June 23, 1996, from the MECCA Arena, now known as UW–Milwaukee Panther Arena, in Milwaukee, Wisconsin. It will forever be known as the night that the Austin Era was born.

Stone Cold Steve Austin beat Marc Mero in the opening match of the night. Split his lip wide open and was rushed to the hospital to get 17 stitches, before returning to the arena to take on 41 year old Jake The Snake Roberts in the finals. It took Austin less than 5 minutes to destroy Roberts in the finals and begin his ascent as to becoming one of the greatest, if not, the greatest professional wrestler of all time.

His post tournament speech was immortalized into the best selling t-shirt of all time when he said, “Austin 3:16 says I just whipped your ass!” It was the catch line that caught fire and began one of the greatest run in the history of the sport. Austin took off from there and never looked back.

Elsewhere on the card, it saw a few other great matches. The main event was between the WWF Champion Shawn Michaels defending his title against the British Bulldog with dastardly referee Mr. Perfect in the ring, and Bulldog best friend Owen Hart calling the match on commentary also at ringside.

This encounter was a much anticipated rematch as at In Your House 8, Michaels defended the title against Bulldog in a match that resulted in a no contest as both men’s shoulders were down on the mat. Although the referee Earl Hebner awarded Michaels the victory, Bulldog’s wife Diana Smith, brother-in-law Hart and manager Jim Cornette handed Bulldog the belt. The on-screen WWF President Gorilla Monsoon declared the match a no contest.

The match was loaded with drama and these two put on the classic everyone had hoped for. Shawn Michaels would retain the title as everyone did their part to help put out a great match!

Goldust failed to defend the WWF Intercontinental Championship against Johnson as Amed put him away with ease.

Johnson used a variety of power moves to secure his first and only WWF singles title. It was supposed to be the start of a great run for Johnson, but injuries and a big mouth behind the scenes cancelled that before it could really get going.

Also on the card, Paul Bearer planted the first seed of turning heel on The Undertaker, as during his match with Mankind, Bearer “accidentally” smashed The Undertaker in the head with an urn, causing Mankind to win the match. Bearer would turn on him for good shortly there after.

One interesting note, in a match no one remembers, the Ultimate Warrior made his final WWF Pay Per View performance on this card, a squash match victory against Jerry The King Lawler.

In another interesting note that would forever change the course of wrestling history. The original winner was supposed to be HHH, before the “Curtain Call” resulted in his push being stopped and given to Austin.