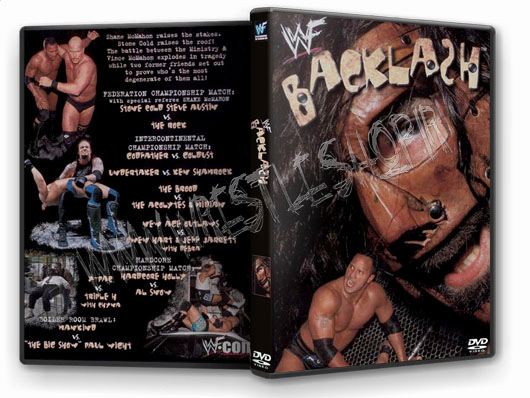 For many years, the WWF at the time, was known for having 4 main Pay Per Views, WrestleMania, Royal Rumble, Survivor Series and SummerSlam.  In the summer of 1993 they added WWF King of The Ring.  It wasn’t until May of 1995 that the WWE in a need of quick money, decided to start with the monthly Pay Per Views.  It was called the In Your House Series, and they would have up to 7 a year between May of 1995 – May of 1999.

Eventually they would switch from each one being called In Your House, and start giving them their own names all together.  One of the most popular ones was Backlash.  An event that typically was the first event to follow WrestleMania.

The first Backlash took place on April 25, 1999, at the Providence Civic Center in Providence, Rhode Island. It was the 28th and final event to be promoted under the In Your House banner and featured several matches from the WrestleMania 15 fall out.

Since the first one back in 1999, there has been countless other Backlash events.  13 total Backlash events have been organized, including tonight.  Let’s now breakdown the main events from each one as we prepare for tonight’s big show!