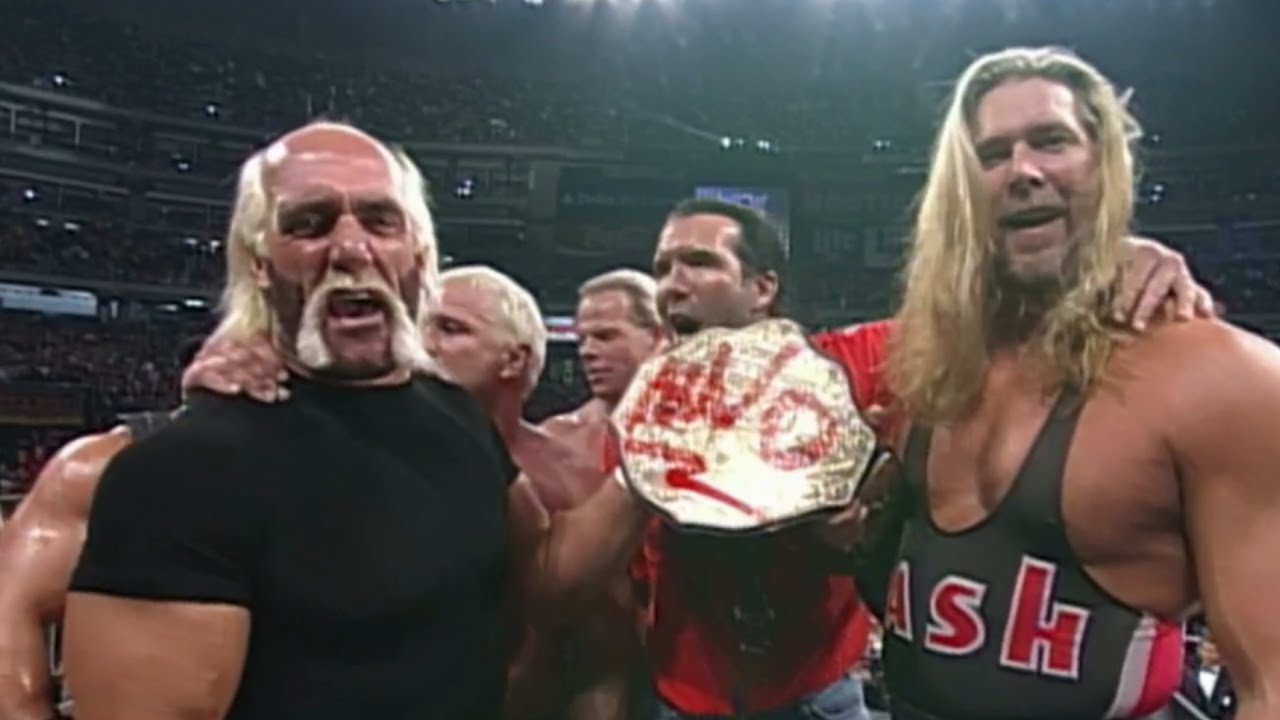 While wrestling fans are ever critical about the writing and storylines in the world of Professional Wrestling, or better yet, “Sports Entertainment”, I’m here to remind them that things can be worse.
Jim Herd, the former President and head booker of WCW once wanted to create a tag team named “The Hunchbacks”. You see, they would have been impossible to pin.  You know, because of the Humps in their backs wouldn’t allow their shoulders to touch the mat.  Thus making them the unbeatable tag team.  It didn’t pan out.

Herd was also the same man who wanted to re-invent Ric Flair by making him shave his head and wear an earing. That as well, never saw the light of day.  However, if you gave Vince Russo enough time in 2000-2001, it may have.

For all of Herd’s faults, he wasn’t the worst of all time. No, that prestige goes to Kevin Nash, who proceeded to do more damage in a 90 days span to WCW that they never recovered and ultimately went bankrupt.

Here to follow are his 3 worst moves between December 1998 and March 1999, that began to drive the nails in the coffin of a once very profitable company.

WCW did very few things right, but one thing that they did excellent was allow the organic nature of Bill Goldberg to be created.  Between his debut in September of 1997 – December of 1998, he won 173 matches in a row.  He captured the United States Title and the WCW World Title over Hulk Hogan in front of 56,000 people at the Georgia Dome.  He was easily the most popular wrestler in Pro Wrestling at the time, and someone who may have been the man to replace Sting as the face of the franchise for a long time to come.

It wasn’t long after Kevin Nash and his gigantic ego took over, that things were booked to change. Under the reign of Goldberg, the WCW felt their largest boom period in popularity and financial growth in company history.  He was the man to lead them into the next century.  Kevin Nash on the other hand was not.  If you recall, Nash was the guy in the WWF who almost ran them out of business during his championship reign in 1995.

The major push began with Nash leaving the Black & White NWO and creating the NWO Wolf Pack Red and Black. It was actually pretty cool and went over well with the fans.

It also stoked his EGO nicely as he was seen as the “leader” of the group, despite bigger, more established WCW names such as Lex Luger, Macho Man and Sting also being a part of the group.

So they pretty much took 3 of the most popular wrestlers in the company, and made them report to Nash. But that’s okay, because at least WCW still had Goldberg and Rey Mysterio to rely on, but we will get to that later.

After Nash single handily ran through 59 other men at WCW World War 3 in November of 1998, he earned his Starrcade title shot against Goldberg. Surely, the young and up coming beast known as Goldberg would have no problems running through the tall, but aging and injury prone Nash?  I mean this was the guy who had beaten EVERYONE beforehand.

Insert Logic out the window, as Nash ended the streak with the help of Bam Bam Bigelow, The Disco Inferno, A Partride in a Pear Tree, and his good buddy Scott Hall with a tazer gun.

Now, with Nash on top, one would think a long build would begin with Goldberg ultimately getting his revenge and his title back right? I mean, it wouldn’t only make sense for Nash to have a long title run to certify why he was the one who stopped the streak? Anything else would make this a horrendous decision……

Two weeks after the horrendous booking decision that had Kevin Nash defeat Goldberg to end his winning streak, an even bigger mistake was made as Nash was slated for a rematch with Goldberg for the WCW World Heavyweight Championship.

It wasn’t to be however as luck would have it, Goldberg was arrested during the show for stalking Miss Elizabeth. Shockingly, Hulk Hogan made his return and challenged Nash instead. Hogan had been in retirement for the prior 2 months planning on a run at the White House.

The match turned out to be a farce however. Hogan poked Nash in the chest, pinning him and reuniting the NWO. While this insanity was going on, Tony Schiavone made an announcement that Mankind would be winning the WWE title, causing hundreds of thousands of viewers to make the switch over to Raw.  Mix in the fact that they should have, and could have had Nash hold the belt for the next year until having the Ultimate Rematch with Goldberg, and it would have been the biggest pay day in company history.  Instead, they went the cheap heat route and it blew up in their face.

The newest version of the NWO would go through several incarnations and ultimately fail miserably.  But hey, Hulk Hogan got to be on the cool team for a few months there.  Great Job WCW, great job! 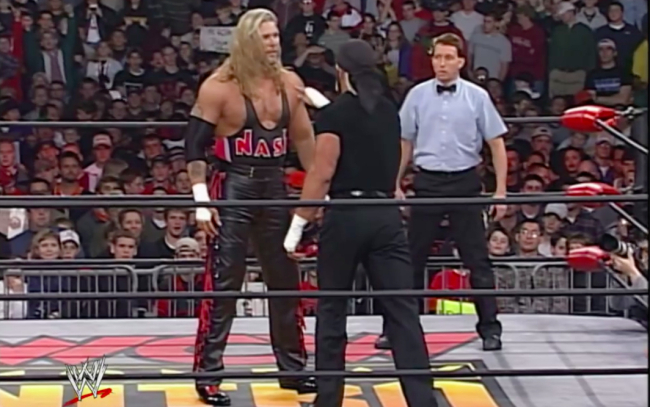 In a matter of weeks, Nash managed to end the incredible winning streak of Goldberg.  For what turned out to be zero followup, only to give the belt back to Hollywood Hogan.  Thus, crushing his popularity, the momentum of Goldberg and the path of ruins left behind included Sting and Lex Luger in that mess.  Step back and look at it.  Luger was now a heel, Goldberg and Sting more or less disappeared, and the most popular faction in wrestling, The NWO Wolfpac, now had heels in it as well.  The whole thing was a joke.

But wait, WCW did have one more guy left the fans loved, one more guy who hadn’t yet been disposed by the EGO of Kevin Nash.  One man left who fans of every age and every size adored.  A man so beloved by fans that it didn’t even matter that he was 5 foot 3 and wore a mask.  Well, Nash and the booking committee wasn’t going to stand for that.

Rey Mysterio JR came to WCW in the summer of 1996 and dominated the cruiserweight division.  He became the face of the division with the ability to have a five star match with whomever they put in their with him.  He was a champion several times over, and even a television champion as well.  His match with Eddie Guerrero at Halloween Havoc 97 will forever stand the test of time as one of the greatest matches in Pro Wrestling History.

Part of the mystique that Mysterio had was his mask.  He never took it off and fans loved him for it.  He was so popular and one of the few guys left in WCW that fans could truly get behind and believe in. His mask was a symbol of his heritage, tradition and strength.  It was unthinkable that he would ever lose it.  In February of 1999, EGO would strike and for no apparent reason at all, Kevin Nash booked himself to win a match over Mysterio at SuperBrawl 1998, that forced Mysterio to unmask.

It did nothing to advance the career of Nash, and Rey Mysterio was never the same for the rest of his WCW run.  Totally pointless!